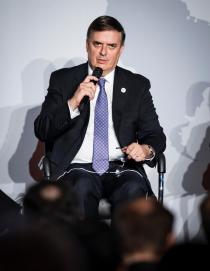 MEXICO CITY — A Mexican delegation of high-ranking officials is still in Washington preparing to dialogue with the U.S. government. Their plan is to avoid the enactment of President Donald Trump’s threat to impose tariffs to Mexican goods. As tensions linger, an opportunity for border states arises.

Trump wants Mexico to stop the flux of Central American migrants to avoid the tariffs, but Mexico is not making any changes to its policies.

“More than closing differences, this moment where the Mexican government can set up the tone on a different level than Trump’s,” said Esther Ponce Adame, director of the Center For International Cooperation Towards Development (Centro de Gestión y Cooperación Internacional para el Desarrollo), a research center based in Mexico City.

Ponce said there’s an opportunity for Mexico to incorporate nonprofit organizations and local governments from both sides of the border.

For the researcher, border states such as Arizona and Sonora could step up and work on bilateral agreements to help solve the situation, while the diplomatic agenda on regional cooperation advances.

"It is not only a problem of Central America, Mexico or the United States, but a regional situation," Adame said.