Solana Plant Sparks Questions About The Politics Of Solar Energy 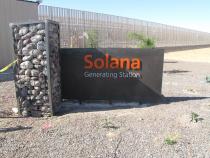 (Photo by Steve Shadley-KJZZ)
The entrance to the Solana Generating Station near Gila Bend.

If you ever wanted to see one of the world's largest solar plants, take a trip out to the Arizona desert. KJZZ's Steve Shadley just took a tour of Arizona Public Service's new Solana plant and filled us in on his experience and how the Solana plant unique from other solar facilities around the world.

"Currently, the big challenge for solar power producers is storing electricity. With traditional photovoltaic solar panels that have been used for decades now, once the power is produced it immediately goes to the grid," Shadley said.

Shadley interviewed Brad Albert, a resource manager with APS. Albert said Solana in Arizona is the first solar plant that uses a mixture of salt and water to store electricity for peak demand periods like after 5 p.m. when a lot of people get home from work and turn down the air conditioners on a hot day.

Will this solar plant effect utility bills for APS customers?

Albert said solar power produced at the plant means the utility can provide consumers with electricity at a stable price. The sunlight is plentiful in Arizona and free of course, and he said it is not like coal or natural gas prices that go up and down at the mercy of consumer demand around the world.

“Where APS has to go out on the open market and buy natural gas at prevailing market prices to fuel those power plants and that can sometimes be a volatile or unstable type of price that we pay for our natural gas," Albert explained.

Solana has been up and running for about a month now, and there has been a lot of discussion recently about net metering. The Arizona Corporation Commission is scheduled to hear about that issue starting on Wednesday and could vote on it next week, as well.

The politics of solar energy have been on full display, so we wanted to get a sense of what those politics are. We have two perspectives starting with former Arizona Congressman Republican Ben Quayle.

Now, this may shock you a little bit, but David Schapira does not completely disagree with what Quayle had to say. A Democrat, Schapira is the former minority leader of the Arizona Senate.