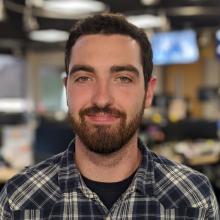 Harry Croton is a graduate student at the Walter Cronkite School of Journalism and Mass Communication at Arizona State University. He joined KJZZ as an intern in 2020.

Croton attended San Francisco State University and earned a degree in business administration. After working in the Bay Area for two years, he realized his true passion was broadcasting and moved to southern Oregon to begin a career in sports media. He was a commentator and journalist for Table Rock Sports in Medford and eventually moved back to his hometown of Santa Barbara, California, to work for the local summer collegiate baseball club.

He is now pursuing a master's degree in sports journalism and is determined to learn how to document and produce all types of news. He writes for the sports desk at the ASU's State Press and hosts two shows on Blaze Radio, the university's student-run radio station.