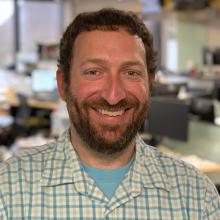 Adam joined the KJZZ team as a producer for The Show in September 2021.

An Arizona native, Green graduated with a journalism degree from the University of Arizona and has spent more than a decade working in media, focusing on sports, technology and the local food and beverage scene. While he still very much enjoys all those things, Green is excited to jump into news while helping to tell the Valley’s limitless interesting stories.

When he’s not working Adam enjoys spending time with his wife and dog while making time for video games, television, movies and craft beer. He can often be found stressing over his fantasy sports teams and wishing the Arizona Wildcats were better at ... well ... everything.