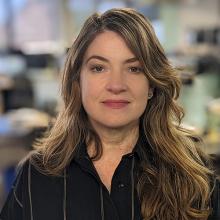 Sativa Peterson is a journalist, librarian and archivist.

Between 2017-2019 Peterson was the project director for a National Digital Newspaper Program grant awarded to the state of Arizona through a partnership between the Library of Congress and the National Endowment for the Humanities. Peterson helped digitize over 100,000 pages of historic newspaper content for the Chronicling America and Arizona Memory Project websites.

Her work has appeared in local and national publications such as New Times, BUST and Modern Loss and she has hosted the workshop, “Time Travel Through Historic Newspapers,” at Valley bookstore Changing Hands.

Peterson’s short personal documentary, “The Slow Escape,” originally released in 1998, is now on the Criterion Channel.

Peterson’s first job in high school was at KINO 1230 AM in her hometown, Winslow, Arizona. Peterson worked afternoon and evening shifts spinning county music in the high desert.