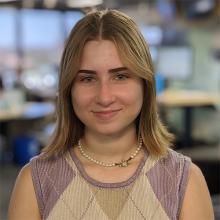 Ainsley Ryan is studying journalism at Arizona State University's Walter Cronkite School of Journalism and Mass Communication. In addition to interning for KJZZ, she is a digital media intern with Sun Devil Athletics, producing multimedia content for their social media accounts.

This past school year, Ryan was an ASU gymnastics reporter for the Walter Cronkite Sports Network (WCSN). She produced and edited multiple packages, which were published to WCSN's YouTube account. Ryan also did a live segment for Cronkite Sports Live.

Ryan's passion for digital media and journalism runs deep. Before college, she was heavily involved in her high school's audio, video, technology and film program. During those four years, she gained experience both on and off camera. She was an anchor on her school's daily live news show and made news segments for it. She also won two national awards from the Student Television Network for her video work.