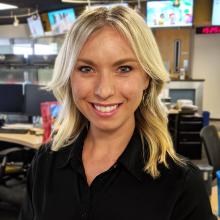 Lauren Gilger is an award-winning journalist whose work has impacted communities large and small, exposing injustices and giving a voice to the voiceless and marginalized. She is dedicated to building community through storytelling and believes everyone has a story to tell.

Gilger worked as an investigative producer and reporter for ABC15 News in Phoenix after earning her master’s degree in broadcast journalism from the Walter Cronkite School of Journalism and Mass Communication in 2011, where she was named Outstanding Graduate Student.

She was the recipient of the prestigious George Foster Peabody Award and an Edward R. Murrow Award in 2013 after her work forced one of the world’s largest automakers to recall more than 700,000 SUVs.

Her work has uncovered the systemic separation of immigrant families in the detention system, put pressure on the FDA to review a controversial form of birth control that has injured women worldwide, and exposed the backlog of untested rape kits in the country’s sixth-largest metro area.

In the Valley, Gilger has worked as a contributor for the Phoenix New Times and a clerk at the East Valley Tribune. Nationally, her work has appeared in the Washington Post and on ABC’s Nightline.

Journalism is in Gilger’s blood. She grew up in newsrooms as her mother worked at newspapers across the country.