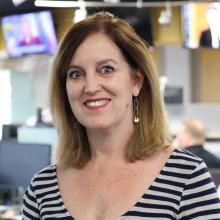 Kerry Fehr-Snyder is an award-winning journalist with more than 30 years of print experience and an emphasis on science and medical reporting.

She honed her understanding of science journalism during a yearlong Knight Foundation fellowship at MIT for science and technology writers. There, she audited classes at MIT and Harvard in a variety of courses, including evolutionary biology, astrophysics and biotechnology during the race to map the human genome. For fun, she took a class sculling on the muddy Charles River, where she gained an appreciation of the laws of physics.

During her long reporting career at The Arizona Republic, she mentored and edited younger journalists. Later, she wrote and designed the monthly medical-marijuana newsletter for the Arizona Department of Health Services and its 70,000-plus certified cardholders.

Most recently, she was the associate editor for the San Tan Sun News, a community newspaper in south Chandler that is produced by Times Media. While there, she edited freelance stories and assigned news stories and features, while also editing the Scottsdale Airpark News and other Times' publications.

Fehr-Snyder is a near-native of Tempe, where she earned degrees in journalism and economics from Arizona State University.