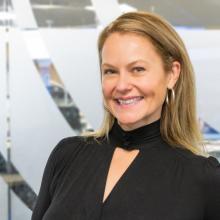 Heather van Blokland moved to Phoenix in March 2016 to join KJZZ as a host/producer, after working as an on-air host/producer at Oregon Public Broadcasting in Portland, covering middays, weekends and most everything in between. van Blokland previously worked as a Morning Edition host and reporter at Florida NPR affiliate WUFT-FM, covering business and agriculture beats. She was also the local producer and editor for StoryCorps’ story booth.

Like many in public media, van Blokland brings a diverse background to her daily duties. Her first career was in the private sector as a financial analyst manager in commercial and investment banking. She also used to teach canoeing and kayaking on the local rivers in North Central Florida. Her education includes a master’s in mass communication from the University of Florida, a bachelor’s in finance, marketing and multinational business from Florida State University, and a diploma in acting for film and television from Vancouver Film School in Vancouver, British Columbia. She wrote and produced a film, later submitted to the Vancouver International Film Festival.

In her free time, van Blokland enjoys exploring the outdoors, everything from a hike on South Mountain to Vancouver's Butchart Gardens to a ride through Swaziland’s Mkhaya Game Reserve. Her travels have included South Africa, Swaziland, western Canada, Australia, the British Isles, Argentina, Uruguay and Paraguay and summers on the outskirts of London. She is also a certified open-water diver, and still looking to apply that skill in Phoenix.

Half Southern and half English, van Blokland enjoys using phrases that surprise people. She does not enjoy steak and kidney pie or Monty Python. You can send your ardent disagreements with this statement to her directly at [email protected].