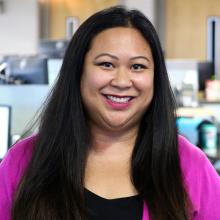 Jean Clare Sarmiento joined the digital team at KJZZ in 2019 as a digital editor.

Originally from Los Angeles, Sarmiento graduated with an English degree from UCLA and, after working at the college paper, fell in love with journalism.

She moved to Phoenix in 2004 to work for The Arizona Republic as a news copy editor, and later joined azcentral.com as a home-page and politics digital producer. Sarmiento enjoys the craziness of the newsroom, such as when breaking news happens or working election nights, and getting that information out accurately and quickly.

Sarmiento has also worked in communications and social media at Arizona State University's Biodesign Institute, as well as at the Walter Cronkite School of Journalism and Mass Communication and Arizona PBS.

When Sarmiento isn't at KJZZ, she's playing a lot of board games, going to board-game conventions, and writing about them on her board-game blog.