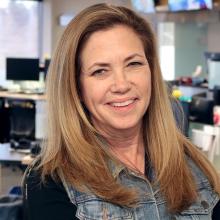 Holliday Moore is a native Arizonan and veteran journalist who joined KJZZ’s news team in January 2017.

Moore graduated from Arizona State University after double majoring in mass communications and marketing/management. She spent her first two decades reporting for television news, beginning in small markets and working up to congressional correspondent in Washington, D.C., for a political news service.

Family commitments in Arizona brought her back to the Southwest, where she covered legislative and court beats for Albuquerque’s KRQE-TV and the infamous Four Corner Manhunt as KREZ-TV’s managing editor.

Back home in Phoenix, she developed ABC15’s “Democracy Project,” now instituted at all Scripps’ news stations nationwide. Her work garnered “Best Practices” recognition by the Poynter Institute and the prestigious Walter Cronkite Award for Excellence in Television Political Journalism.

Her television reports, from sports to cultural issues, earned her multiple Emmy and Associated Press nominations, including a Rocky Mountain Emmy for her Hopi Partition Land Act coverage.

As she started a family, Moore started her own media production agency, producing magazine-style travel stories for the Emmy-winning Arizona Highways Television show while working part time for a Valley radio station. She is convinced radio is where visual, sound, and print are merging through deeper storytelling. In her relatively short time with radio network affiliates, she has won four Edward R. Murrow Awards and multiple nominations from other professional news societies.

Moore now teaches advanced broadcast writing to the next generation of reporters at ASU’s Walter Cronkite School of Journalism and Mass Communication, where a high percentage have gone on to receive national awards for their work in her class. She enjoys being back home near childhood friends and sharing the beautiful Arizona desert with her husband and young son.