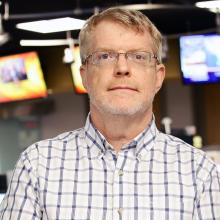 An Arizona native who grew up in central Phoenix, Bruce Drummond briefly decamped for the East Coast to earn a degree in international relations at Georgetown University in Washington, D.C.

After spending 10 years at the Arizona Attorney General's Office as a civil rights investigator, Drummond landed at KJZZ's sister station, Sun Sounds, where he hosted the weekly classical music program. This led to a job at KBAQ, where he realized a lifelong dream to play classical music on the radio.

When he's not hosting or running the control-room board at KJZZ, Drummond can usually be found watching old movies and listening to public radio or one of its podcasts.