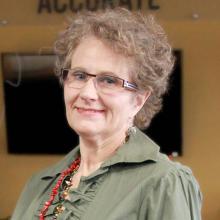 During her career in radio spanning nearly 30 years, Laura has never lost her love, passion and fascination for the medium, which was first sparked during a sixth-grade field trip to a local radio station.

A Cincinnati-area native, a large portion of her career has been as an air talent and music program host, producer, production director, creative services writer, and, voiceover talent. Laura has worked in both commercial and public radio in Cincinnati, Dayton, Louisville, Lexington, and several other cities, at stations including WEBN, WNKU, WFOX and WUKY. She attended Ohio University and Northern Kentucky University, with majors in radio/television and mass communications, and English.

Upon moving to the Valley of the Sun, Laura had to take a few years off from radio due to family matters but missed the field tremendously. After deciding to return to radio, she was very excited when she saw KJZZ needed a host for weekends and leaped at the chance to return to her first calling. Laura has been KJZZ’s host for Saturday and Sunday Edition, is now the Sunday afternoon host, and, during fund drives, is a primary host on KJZZ Plus, the regular-programming audio stream on KJZZ.org.

In her spare time, Laura loves listening to music and checking out live bands, reading books about science, biology, biographies, and non-fiction, reading and writing poetry and essays, and attempting to play the guitar.