2014 Disappearance Of 43 Mexican Students Remains Unsolved, But Their Legacy Persists

2014 Disappearance Of 43 Mexican Students Remains Unsolved, But Their Legacy Persists 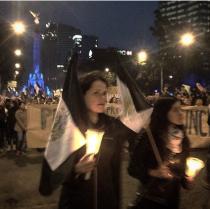 Rodrigo Cervantes
As a symbol of mourning a loss, black Mexican flags and candles have become part of the protests in Mexico for the abduction of the Ayotzinapa students. 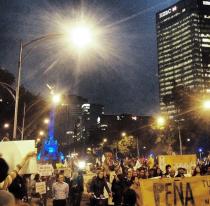 Rodrigo Cervantes
Two years ago, thousands of people gathered at the emblematic Independence Angel monument in Mexico City to demand justice in the disappearance of 43 students from Ayotzinapa, in southwest Mexico.

MEXICO CITY — Two years ago, 43 students from the small town in Mexico mysteriously disappeared. Their absence ignited an entire movement against government oppression in Mexico, while their parents still mourn their loss.

The night of Sept. 26, 2014, a group of undergraduate students from the rural town of Ayotzinapa, in southwest Mexico, were abducted. They never came back, but their memory became a pennant for those who fight against oppression and insecurity in Mexico.

They were undergraduate students from a rural teacher school with a tradition of activism. The night they disappeared, they were planning to go to Mexico City for a rally using hijacked buses.

But the students were intercepted by the police in the city of Iguala, and after a confrontation, 25 of them were hurt, six died and 43 were abducted and still missing.

Since then, in massive protests and rallies in Mexico, it not unusual to hear a headcount of the 43 missing students; a way to demand justice.

Two years after the abduction, the Mexican government has been unable to provide an answer that could convince the outraged population ... including the students’ parents.

Cristina Bautista Salvador is the mother of Benjamin Ascencio Bautista, one of 43 abducted students. Her fight to find her son has not stopped.

“It’s been  two years since the disappearance of our children and the government can’t tell us where they are, when it was the government who coordinated their disappearance,” said  Bautista. “But the Mexican government used to do this, it disappears people, kills them, incarcerates them and nothing happens.”

According to some reports, the military and federal forces either participated in the abduction or refused to intervene, while a local drug band — or the law enforcement bodies — presumably killed them.

Bautista, as other parents of the disappeared, has continuously met with Mexican officials, foreign observers and activists. But she thinks that the government, including President Enrique Peña Nieto himself, lie and evade their responsibility.

“During these two years we have met several times with Mexico’s attorney general and two times with the president. The second time we met him, he told us that the case was in hands of the secretary of the interior and the attorney general, speaking about politics and beating around the bush, trying to block our questions,” said Bautista.

In November 2014, Mexican authorities arrested the mayor of Iguala, José Luis Abarca, and his wife, accused of being the masterminds behind the disappearances. Still, the federal government has been unable to find the students or identify human remains, even with the intervention of non-government and international organizations.

For Gustavo López, professor and researcher of political sciences at Monterrey Tech in Mexico City, the government hasn’t managed the issue well, making it seem ineffective.

“Trust is very important for building social capital, which is the base for democracy,” said  López. “If we don’t know the truth about what happened, it will be difficult to build a working democracy."

And not only it is still unclear what happened to the students, but there are too many versions that collide, with political interests behind them, said López.

However, López thinks that the issue will not be forgotten, as it will take historic relevance.

“We can make a parallelism with what happened in 1968, when students were killed in Mexico City’s downtown. But the ‘68 hasn’t been forgotten and Ayotzinapa it’s not going to be forgotten either," López said.

But for Bautista, their disappearance is already meaningful.

“The people of Mexico has awakened and has lost its fear. Now, none of us can stay quiet. We can’t allow the government to continue trampling us. We must defend our rights,” said  the mother.

EDITOR'S NOTE: Samantta Hernández and María Fernanda Hernández from the Tec de Monterrey in Mexico City contributed to this story, as part of a collaborative project with KJZZ.