Mexico Is Having A Fight Over The Word 'Mezcal'

Mexico Is Having A Fight Over The Word 'Mezcal' 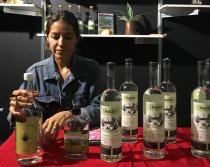 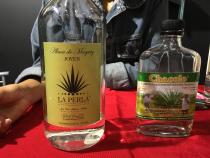 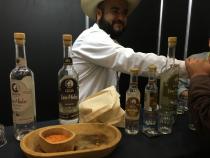 Mexico is proposing a small change to the rules governing mezcal — not over how it’s made or who drinks it, but simply over the word itself. That might sound insignificant, but a small tweak could have a big impact on the types of mezcals people drink in Arizona and elsewhere.

At a recent festival for distilled agave in a shiny convention center in Mexico City, a tall man wearing a thick moustache and a cowboy hat is standing behind an exposition booth.

His name is Emilio Cervantes, and he’s talking about his favorite subject -- the mezcal he and his family have been producing for decades. Sometimes, he travels to the United States to sell it.

And as we’re talking, a distributor from down the hall hands Cervantes a small glass with a sample. Cervantes puckers his lips, takes a tiny sip and swishes it around his mouth. He describes the spirit he’s drinking as fruity, earthy and herbal.

“It’s very good,” Cervantes says. “It’s a mezcal from the state of Mexico.”

But the label on the drink Cervantes is sampling doesn’t say mezcal. It says it is a distilled form of agave, which is the plant used to make mezcal. To figure out the difference between that drink and mezcal, we call the man who produces it at his agave farm four hours south of Mexico City.

The producer, Jose Luis Medina, says he couldn’t afford to go the convention to sell his product personally. But he’s been at work for a long time: he started learning the process of distilling agave plants into mezcal when his father and grandfather began teaching him at the age of 8, he says.

Medina’s first job was helping pluck the wild agave plants. And even though he’s now been doing this for more than 30 years, he claims that it’s not his years of experience that make his distilled agave so good.

“It’s not so much the time, but the dedication and love you put into it,” Medina explains. “When you do things you like, they turn out the way you want them.”

But Medina’s farm — near a small town called Zumpahuacán in the state of Mexico — is outside of the geographical jurisdiction the Mexican government determined 20 years ago was the official origin of mezcal. Medina can still make and sell his product, but he can’t call it mezcal. He has to call it distilled agave.

“To me, it’s as if they’re depriving us of our culture,” Medina says. “At the end of the day, the word mezcal doesn’t belong to anyone in particular. It’s our heritage and our tradition. That word belongs to all Mexicans”

Not exactly. The Mexican government owns the word mezcal, the same way it owns the word tequila, according to the Mezcal Regulatory Council. And a new proposal would force producers outside of the area of origin to call their product aguardiente de agave, or agave firewater.

Cuervo doesn’t produce mezcal, but it’s interested in the mezcal market, given how popular it has become in Arizona and elsewhere. Mariscal says he realizes some of the government proposals are tough.

“But we don’t agree that somebody wants to benefit from the goodwill of mezcal or tequila, for the sake of this conversation, if they don’t comply with the regulatory standards that we comply with.”

Small producers like Medina have been working with the government. He and others in the state of Mexico expect to get permission to use the word mezcal by early next year. He says with the new label, his distilled agave could sell for twice as much and he could improve the quality of life for his family.

“We don’t live with a lot of luxuries,” Medina says. “We don’t eat meat every day. We eat meat when we can.”

Medina says that, maybe in the future, he can afford more luxuries — like actually attending a convention to sell the drink his family has been making for generations.