Sanders Stumps For Clinton In Flagstaff

Sanders Stumps For Clinton In Flagstaff 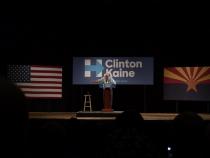 In the final weeks leading up to the general election, Hillary Clinton’s campaign is focusing efforts on divided states like Arizona. Vermont Sen. Bernie Sanders rallied his Flagstaff supporters Tuesday to vote for Clinton.

It was standing room only at the Northern Arizona University auditorium. Several people who couldn’t fit inside listened from the lawn. Students chanted “Feel the Bern!” and “I will vote!”

Sanders has strong support from this college town. In the primary, he carried Flagstaff and Coconino County.

Valentin Guzman is a freshman at NAU who voted for Sanders in the primary but plans to vote for Clinton on Nov. 8 because he says the candidates agree on the issues important to him — issues like immigration, affordable college and health care.

“I’ve been sick for a week, and I can’t go to the doctor and get medicine without spending a fortune,” Guzman said.

During his stump speech, Sanders focused on the issues he and Clinton have in common — like health care, minimum wage, pay equity, affordable college, climate change and maybe most energetically beating Donald Trump.

“Mr. Trump is the least qualified candidate in the history of this country to ever run for president,” Sanders said.

And he told the crowd, if people tell you, “'I don’t like these candidates. I’m not going to vote.’ You ask them why they think the Koch brothers are spending hundreds of millions of dollars on this campaign. If the Koch brothers, a family that wants to eliminate Social Security, Medicaid, federal aid to education, that does not believe we should take action on climate change. Tell your friends they damn well better understand this election is important.”

And if there was any doubt at the beginning of the rally, by the end the chants had switched from “Feel the Bern” to “I’m with her.”