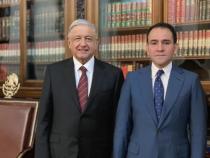 MEXICO CITY — On Tuesday, just seven months after taking oath, Mexico’s president was surprised by the resignation of the finance secretary, who slammed the administration on his way out.

The letter suggests that the government is making decisions affected by political extremism and without the proper information.

Urzúa also wrote that unprepared officials got their positions through favoritism.

López Obrador named former undersecretary of Finance Arturo Herrera as Urzúa’s replacement. Herrera is currently an NYU doctoral candidate and worked with López Obrador in the past, when AMLO was Mexico City's mayor.