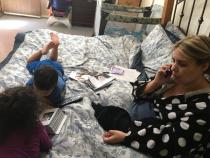 Michel Marizco
Alicia Jimenez speaks to a friend on her phone while two of her children play with photos of her and her husband.

Last November, Alicia Jimenez found herself in the unique position of trying to convince a Superior Court judge in Bisbee that her husband hadn’t just disappeared in Mexico, but that he had died there. Last Thursday, the judge agreed with her, bringing to a close one story involving a typical style of crime in Mexico: missing victims whose fate normally leaves families hovering in limbo.

She explained last year what that ordeal had been like: "Every single door I knocked, every place I looked: 'What are you going to do?' He’s missing. We don’t know. 'You need a body, you need a death certificate.'"

"I’m very happy that the judge saw things our way. I think that there was ample evidence as did he," Asimou said.

As part of the order, the judge ruled the Arizona Department of Health Services must issue a death certificate dated last October.