Behind The Super Bowl, Mexican Avocados Fight For US ‘Guac’ Bowls

Behind The Super Bowl, Mexican Avocados Fight For US ‘Guac’ Bowls 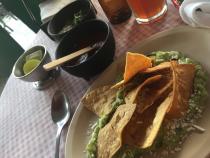 Rodrigo Cervantes
Guacamole is a Mexican dish, and so is its main ingredient: avocado. Mexico is the top producer of avocados in the world and the main supplier for the US. 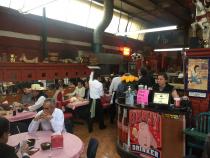 Rodrigo Cervantes
Like many other restaurants in Mexico City, Los Chamorros de Tlacoquemécatl serves guacamole, either as a snack, as a side or a taco ingredient. 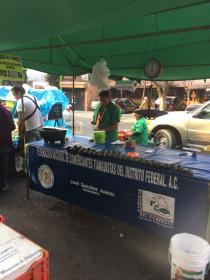 Rodrigo Cervantes
Some vendors in street markets or "tianguis" in Mexico City specialize in selling avocado and sometimes they also sell guacamole. 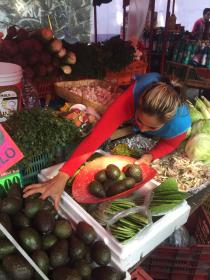 Rodrigo Cervantes
Rosa María has been in the grocery business for three decades. Avocados are among the top products that she sells in street markets in Mexico City. 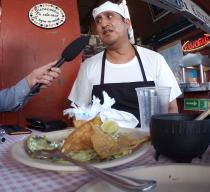 Mexico City — For many in the U.S., a good Super Bowl party comes with a tasty “super bowl” of guacamole. But its main ingredient, the avocado, is at the center of a trade dispute between the US and Mexico that’s recently caused tons of the creamy fruit to be turned back at the border.

But why is avocado so relevant for the U.S.-Mexico trade … and for the Super Bowl?

If you’ve watched the Super Bowl on TV in the past few years, you probably remember the "Avocados From Mexico” ads, like the one where a football fan named Dave was miserable for missing touchdowns every time he was dipping a chip in his guacamole.

In case you don’t remember the 2015 ad, Dave solves his problem smoothly ...

“He made his guacamole arm-dipper gizmo. Now he can enjoy the game with his amigos. Muy bueno, Dave, muy bueno,” explains an off-camera voice.

So if you know those avocado ads — and the high cost of air time during the Super Bowl — you can probably imagine how important it is for Mexican producers the American market.

Mexico is the top avocado producer in the world. In fact, the origins of the fruit are here, and even its name comes from an Aztec word.

Avocados From Mexico is the brand used to commercialize the imports, which happen to be very popular. Eight out of 10 avocados sold in the U.S. are Mexican.

The United States is the largest importer of Mexican avocados. And when is this fruit demanded the most? When guacamole is needed the most: the Super Bowl weekend.

“Consumption in the Super Bowl is very high, it is about 10 to 12 percent of the entire consumption of the year,” explained Ramón Paz, adviser of the Association of Producers and Exporters of Avocados From Mexico, the organization that also operates the Avocados From Mexico brand that you hear on those TV jingles.

“Just the day of the Super Bowl, we expect a consumption of something like 35,000 tons,” he said.

According to Mexican authorities, Mexico exported more than 700,000 tons of avocado to the U.S. for most of last year. The demand grows steadily, according to Paz.

But before that happened, there were years and years of struggle from Mexican producers to bring avocados to the American tables.

For almost the entire 20th century, imported avocados were banned in the U.S. But the taste for avocado grew, and so did the commercial ties with Mexico. The North American Free Trade Agreement gave the final push that made Mexican avocados expand.

“The largest markets are in the West Coast, actually California, Arizona, Oregon and also Texas, of course. The fastest growing markets are the Midwest and the North Eastern states,” Paz said.

But for some Mexican producers, the fight for the American market is not over yet. And the reason lies on the fact that only one Mexican state is authorized by the U.S. to sell its avocados: Michoacán.

Lino Anastasio is a cook in a small restaurant in Mexico City. He uses avocados from the state of Michoacán to prepare every day guacamole, a popular snack or side for their pork dishes.

In fact, 80 percent of the Mexican avocado comes from Michoacán. No wonder that Lino’s kitchen, as well as the majority of restaurants, fondas and taquerías in Mexico, use avocados from that state.

“I’ve heard that the United States is not allowing it anymore,” he said. Lino has heard rumors that Mexican avocados won’t be allowed in the U.S. territory under the new administration.

That’s because, in late January, something close to that happened: a shipment from the state of Jalisco was stopped at the US border in Texas. Despite Jalisco got the U.S. Department of Agriculture approval last year, but the avocados had to be diverted to Canada or sent back to Mexico.

Is there a quality difference between Jalisco and Michoacán avocados?

In the rowdy street markets of Mexico City, avocados are mostly sold without labels. Only by asking, you might know the state of origin. But Rosa María, a woman who has sold them for three decades, can tell the difference between an avocado from Michoacán to others.

“The only difference is in the shell, but the flavor is the same”, she said. Michoacán avocados tend to be softer on the outside and with less bumps, Rosa explains, while caressing one of the creamy fruits sold in her stand.

And apparently, there is no quality difference for the Mexican or American authorities, as well.

The USDA attributed the shipment rejection to paperwork both countries had failed to sign.

The Secretary of Agriculture of Mexico only said that the avocado halt was a U.S. decision. Jalisco already exports to other countries, which proves its quality, they stated.

But Paz, the avocado lobbyist, was skeptical. He noted that the U.S.’ rejection came just as Mexico turned down a deal to import potatoes from the U.S.

“For some reason, that we think it’s arbitrary, the USDA decided to link the expansion of the avocado market of Mexico from Jalisco and other states with the access of American potatoes to Mexico,” stated Paz.

The USDA declined the accusations, arguing that the negotiation has nothing to do with any other commodity.

However, both agriculture agencies say they are working together to bring a solution. Jalisco avocados will have to wait.

Regardless of the Jalisco avocados situation, Paz is optimistic about the future of Mexican avocados in the U.S., even with the uncertainty brought by a possible renegotiation of NAFTA.

“What I can tell you is that the trade of avocados from Mexico to the U.S. is an example of a very successful trade program. It hasn't taken any jobs from U.S. producers of avocados, it hasn’t taken any producers out of business in the U.S.,” he said.

According to Paz, the supply chain of Avocados from Mexico in the U.S. is creating about 19,000 permanent jobs in the US and is contributing with $3.5 billion to the American economy.

The presence of Avocados From Mexico in the US has created a market that has benefited local producers, Paz says.

Meanwhile, for the Super Bowl weekend, Paz wants to assure American consumers there’ll be plenty of avocados from Mexico.

“We expect all the fans of the Patriots and Falcons to enjoy their guacamole and enjoy their Sunday,” said Paz.

And back in the street markets of Mexico City,  Rosa also has a suggestion for President Trump to enjoy the game.

“He should try Mexican avocados in his guacamole to see the quality of the Mexican produce and of the labor of hard-working Mexicans,” she said.