A Tour Through The Murky World Of Corruption In Mexico

A Tour Through The Murky World Of Corruption In Mexico

Corruptour
The ‘Corruptour’ is a weekly bus tour that shows off what organizers say are Mexico City’s monuments to graft, fraud and impunity 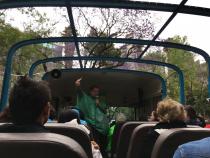 Jorge Valencia
Oscar Rivas, a volunteer guide of the 'Corruptour,' asked tourists on a recent Sunday whether they had been involved in any acts of corruption. 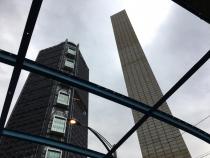 Jorge Valencia
The Estela de Luz -- or Stele of Light -- is the second stop on the ‘Corruptour.’ It celebrates the bicentennial of Mexico’s independence from Spain in 2010, but wasn’t inaugurated until 2012 and cost more than triple its original budget.

Mexico’s White House is not the country’s official executive mansion, but it has been a source of headaches for the president and first lady.

It’s tucked in one of Mexico City’s most exclusive neighborhoods, and features palatial amenities such as underground parking and a large pool. And when a Mexican radio station reported in 2014 that First Lady Angelica Rivera had bought it from a major government contractor at the bargain price of $7 million, the office of President Enrique Pena Nieto quickly became embroiled in accusations of favoritism.

Pena Nieto apologized in a 2016 speech for the unwanted attention the deal had drawn, and was cleared of any wrongdoing by a federal investigation he commissioned.

The notoriety of the case earned the White House the first slot on the “Corruptour,” a weekly bus tour that shows off what organizers say are Mexico City’s monuments to graft, fraud and impunity.

Tourists board a converted tour bus, stripped of its roof and wrapped in tabloid-style headlines, and visit nine sights (the White House isn’t on the tour route because it’s in an out-of-the-way gated community).

The Corruptour was dreamt up by a group of activists in Mexico City who were inspired by a similar tour in the northern city of Monterrey. It has been so popular that most of its tours -- which go out two times every Sunday -- have been at capacity since it started earlier this year, and has spawned an imitation in France.

The tourists, which on a recent Sunday were a crowd comprised almost entirely of Mexico City residents, are not charged an admission fee but are asked for donations.

Stops include No. 2: La Estela de Luz -- or Stele of Light -- which was intended to celebrate the bicentennial of Mexico’s independence from Spain in 2010, but wasn’t inaugurated until 2012 and cost more than triple its original budget. (The federal government paid the bill and eight former officials involved in the tower’s construction were arrested after its completion.)

The bus pulls up to stop No. 5: a monument to the infamous case of 43 university students that disappeared from a small town in the state of Guerrero in 2014; and stop No. 6: the Interior Ministry, which organizers say represents impunity because it’s the agency that oversaw the maximum-security prison from which Joaquín “El Chapo” Guzmán, a drug kingpin, escaped in 2015. (Guzmán has since been apprehended and extradited to the United States.)

About halfway through the ride, volunteer tour guide Oscar Rivas, a jolly man with salt and pepper hair, flipped the script. “Who here has participated in corruption?” he asked. The hands shot up, and tourists started confessing.

Cirino, a man wearing a black hat in the back row, said he had been drinking alcohol at a park with friends when a police officer approached them. They offered the cop money, the cop took it and Cirino and his friends kept on drinking as if nothing happened, Cirino said.

So if many of the corruption tour stops were well known, and many of the passengers were guilty of corruption of themselves, why did they want to take the tour?

“In the end, when you’re with a group, you realize that corruption is a collective problem,” said Alicia Meza, a 28-year-old from Mexico City. “You realize the problem starts with you, from school, to work to the street. If we don’t do anything about ourselves, we can’t complain about the people in charge.”

The tour guide, Rivas, likes volunteering on the corruption tour because it almost always fills up and because he meets people with whom he would otherwise never come in contact, he said after a recent tour.

“And,” Rivas said, “you realize that no Mexican likes corruption.”