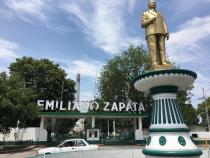 Jorge Valencia
The town of Zacatepec in the central Mexican state of Morelos, a large producer of sugar cane, was built around a sugar mill.

Morelos, Mexico — The process of making sugar begins early for Narciso Hernandez Cuevas. To avoid the stinging summer sun here in central Mexico, he works on his four-acre plantation from sunrise until 10 a.m., and from 5 p.m. until sunset.

The 73-year-old slowly works his way through rows of bright green, 6-foot-tall sugar stalks, hacking off the leaves with a machete.

“The point is for the stalks get more oxygen, so they’ll grow taller and thicker,” he said.

But for all his back-breaking field work, Hernandez is worried about what’s happening in offices far away.

Businesses in the American and Mexican food and beverage industry are finding it difficult to swallow the new agreement for trading sugar between the two countries. The deal seems to be palatable for one sector: producers of alternative sweeteners, including at least one company in Arizona.

Hernandez and the 6,000 sugarcane farmers here in Morelos say the deal signed this month between the United States and Mexico — setting a price and limiting the amount of refined sugar that can be sent to the United States — will hit their business.

“The Mexican government made a luke-warm intervention,” Hernandez said. “The least they could do is get us a good price.”

For packaged food makers and soda companies, overall cost of sugar will go up by $1 billion, according to the Washington-based lobby group Sweetener Users Association. This could be good news for alternative sweetener companies.

Gilbert-based Wisdom Natural Brands, which sells the plant-based stevia for table-top use and for food packaging, is one such company. The global stevia market will grow annually by 8.5 percent until 2020, according to an estimate by Future Market Insights.

But that trend is hard to see from the this sugarcane field in central Mexico. Ignacio Urueta Herrera, another sugarcane farmer, said he and other fellow farmers will pay close attention to exactly how much the new deal changes their income. As Mexico enters broader negotiations for trade in North America, they’ll figure out a way to get their government’s ear.

“We’ll do whatever it takes,” he said.

That might involve political organizing. Farmers have long been reliable supporters of the Institutional Revolutionary Party, which has dominated Mexican politics for most of the past century. And farmers’ vote will likely be key in the country’s presidential election next year.

EDITOR'S NOTE: The photo captions have been updated to correct the name of the town Zacatepec, Morelos.