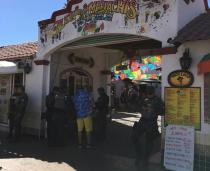 In 2017, Mexico saw its deadliest year on record, and the wave of violence began sweeping into some of the country’s biggest tourist destinations. Gunmen opened fire at a nightclub in Cancun in November and police found six bodies hanging off of bridges along the most transited highway of Los Cabos in Baja California Sur.

Significantly for American travelers, the U.S. State Department issued travel warnings in August 2017 and again earlier this month alerting them of violence in popular tourist destinations. We traveled to Los Cabos — which has as many as four daily direct flights from Phoenix — to find out whether the news had stopped American travelers from visiting.

Of the travelers we interviewed — visiting from Arizona, California, New York, Texas and Wisconsin — none had heard of the State Department’s advisory, and only one had heard about violence in areas surrounding Los Cabos at the bottom of the Baja California peninsula. So we showed them the advisory:

“Exercise increased caution due to crime.

“Criminal activity and violence, including homicide, remain an issue throughout the state. According to Government of Mexico statistics, the state experienced an increase in homicide rates compared to the same period in 2016. While most of these homicides appeared to be targeted, criminal organization assassinations, turf battles between criminal groups have resulted in violent crime in areas frequented by U.S. citizens. Bystanders have been injured or killed in shooting incidents.

“There are no U.S. government restrictions for travel in Baja California Sur, which includes the tourist areas of Cabo San Lucas, San Jose del Cabo, and La Paz.”

For Kristen and Matt Olmschenk, a couple who traveled from Phoenix to get married in Los Cabos, the advisory was a surprise.

“Though that might be true, I’ve never felt safer in my entire life,” Matt Olmschenk said.

Kirsten Olmschenk added: “We had 50 guests come. People didn’t shy away from coming.”

Drug trafficking in Mexico and consumption in the United States has fueled the war here for more than 10 years. And only recently has it arrived on the footsteps of destinations like Los Cabos in the state of Baja California Sur, where the homicide rate grew tenfold in the last five years to almost 500.

"You need to understand that the increase in the violence was because it was a small town," said Carlos Vasquez, vice president for sales and marketing at Solmar Group, one of the biggest hotel companies at the bottom of the Baja California peninsula. "There was no violence for many, many years. We were lucky." (Jorge Valencia)
Carlos Vasquez, vice president for sales and marketing at Solmar Group, says the company will invest close to 5 billion dollars on a luxury housing development around a water-front golf course.

A handful of developers interviewed at Los Cabos say they’re doubling down on their investments. The Solmar Group, for example, will spend close to $5 billion over the next five years on a luxury housing development around a water-front golf course, Vasquez said. The occupancy rate grew slightly to 70 percent last year, the local hotel association said.

Several large hotel groups brought in the government and pooled together to spend $47 million over the second half of 2017 to invest in violence prevention measures, including the construction of a new military base and almost 200 surveillance cameras across the state, said Rodrigo Esponda, managing director of the Los Cabos Tourism Board.

"All of those elements will help, obviously, to deter and to ensure that our resort destination will be safe," Vasquez said.

Paul Wiener, a professor at the School of Hotel and Restaurant Management at Northern Arizona University, quotes the psychologist Abraham Maslow’s theory of the hierarchy of needs. One of the most basic needs is personal safety and the least essential is leisure and self-actualization. So, naturally, travelers won’t visit a destination they perceive as unsafe.

The State Department’s advisory in January warned Americans to completely avoid five states that it equated to the same level as war-torn countries such as Syria and Afghanistan: the border state of Tamaulipas and the Pacific coast states of Sinaloa, Colima, Michoacán and Guerrero. It equated traveling to Los Cabos or to Cancun to traveling to France or Italy. But most travelers didn’t know about the State Department’s advisory.

“If you take the average, leisure traveler, they probably won't even know the State department issues travel advisories,” Wiener said.

For all travelers we met in Los Cabos, their perception and reality of safety was the same. That includes Sam Louther from Mendocino County, California. For Louther, Los Cabos doesn’t seem any more dangerous than, say, Baltimore, Chicago or where she used to live in Oakland, she said.

"We're having an amazing evening," Louther said as she walked down a street lined with art galleries in San Jose del Cabo. "We're trying to figure out how to move here," she said with a laugh.

So for hotel groups here, the challenge is keeping a safe destination as much as a perception of a safe destination for American travelers. But a new survey out this month shows that local Mexican tourists are becoming more weary of destinations, including this one.