Activists Use Virtual Reality To Show Impacts Of Uranium Mining 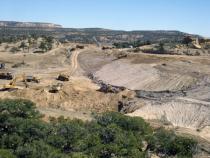 EPA
The Church Rock Mine spill in 1979 was the largest accidental release of radioactive material in United States history and three times the radiation released at the Three Mile Island accident.

A group of activists is using virtual reality technology to show the impacts of uranium mining on the Navajo Nation.

In 1979, a dam broke at a uranium mill's evaporation pond on the Navajo Nation. That breach released 94 million gallons of radioactive waste into the Puerco River. It was the largest accidental release of radioactive material in United States history.

The radiation contaminated not only water but also the food chain. Cattle in western New Mexico later showed higher levels of radiation.

Sunny Dooley lives 30 miles downstream of the Church Rock, New Mexico, spill and says she has felt its direct effects.

"We haul water from Gallup," Dooley said. "People take water for granted and for my reality, it's never been guaranteed."

Dooley joined forces with other activists and artists to create "Ways of Knowing." The virtual reality film shows the impacts the spill had on the land and the communities over the last four decades.

"This is a tool for healing and that's the bottom line," Dooley said. "We don't want to just give you the gloom and doom of it, but what can you do? What can we do? How can we begin to resolve this issue?"