50 Years Of Mexico City's Metro: Secrets And Lessons From One Of The World's Largest And Strangest Transportation Systems

Mexico City’s subway is turning 50. It's one of the largest in the world — and one of the most peculiar ones. In this series, we’ll explore the Metro's secrets and the lessons it could bring to U.S. cities like Phoenix, where rail systems are small or non-existent.

Mexico City’s subway is turning 50. It's one of the largest in the world — and one of the most peculiar ones. In this series, we’ll explore the Metro's secrets and the lessons it could bring to U.S. cities like Phoenix, where rail systems are small or non-existent.

Underneath Mexico City lies one of the largest collections of art, culture and live performances in that country — and maybe in the continent.

Mexico City’s subway is turning 50. And this public transportation system also works as one of the largest cultural centers in Mexico.

For instance, as you walk into the División del Norte subway station, you may discover a karaoke and a public piano, inviting you to sing or play a song.

Paulina Contreras is a music student who took the offer to practice a Coldplay tune.

“This idea is great for people who need to exploit their talents,'' Contreras said, and hopes to find more like this in other stations.

But this is just one out of hundreds of cultural experiences inside Mexico City’s Metro.

Vanessa Bohórquez is the subway coordinator of cultural activities. We met at the Metro Museum, which opened two years ago to preserve the history of the subway while hosting temporary exhibits.

The Metro Museum includes a section documenting the iconic visual and typographic design developed by American graphic designer Lance Wyman, as well as a collection of tickets and historic photos

“For many, the subway is Mexico City’s largest museum,” Bohórquez said. “You could stay in the subway forever and always feel accompanied by its great cultural offer.”

The entire Metro has more than 30 murals, dozens of sculptures, museums, libraries, a planetarium, a movie theater and even a pyramid.

“The most visited archeological site in Mexico is here,” said Bohórquez. It is inside the Pino Suárez station, where 24 million people pass by every year.

The pyramid is the temple of the Aztec god of the wind, Ehécatl, and was uncovered in downtown Mexico City during the subway’s excavations. TOP: The temple of Mexica god Ehécatl can be seen inside the Pino Suárez station in Mexico City. LEFT:The famous graphic identity for Mexico City's subway stations, created by American graphic designer Lance Wyman, is displayed at the Metro Museum. RIGHT: The movie theater at the Zapata metro station in Mexico City serves mainly as a showcase for classic and Mexican films. Rodrigo Cervantes/KJZZ

And the Metro also offers live acts and performing arts almost everyday, like this one. Even the legendary rock band El Tri played for the 50th anniversary celebrations. And they included in their setlist a classic love song called “Metro Balderas,” which is set — no wonder — at a Metro station.

The cultural offer in the subway not only embellishes the city, it also helps bring a friendlier and more peaceful environment,” said Bohórquez.

The coordinator says her area works with zero pesos, but thanks to the contributions of artists and supporters. And it’s all included on the Metro’s ticket, which costs roughly 25 cents.

In two stations in downtown Mexico City, the Metro just opened two art galleries. One of them, at Hidalgo station, is expected to be the largest in the world, displaying the works of 300 international artists on a 200,000-square-foot area.

The other one is where Noemí Martinez walked for her first time. She’s a housewife passing through a pedestrian tunnel covered with screens for a video art installation at the Bellas Artes station.

Martínez said the exhibit is beautiful. It mixes sounds, nature landscapes and wildlife with abstract animations made by surrealist artist Pedro Friedeberg.

“Our lives are always on a fast-pace, but this art displays help us stop and think about what’s truly important,” Martínez said. 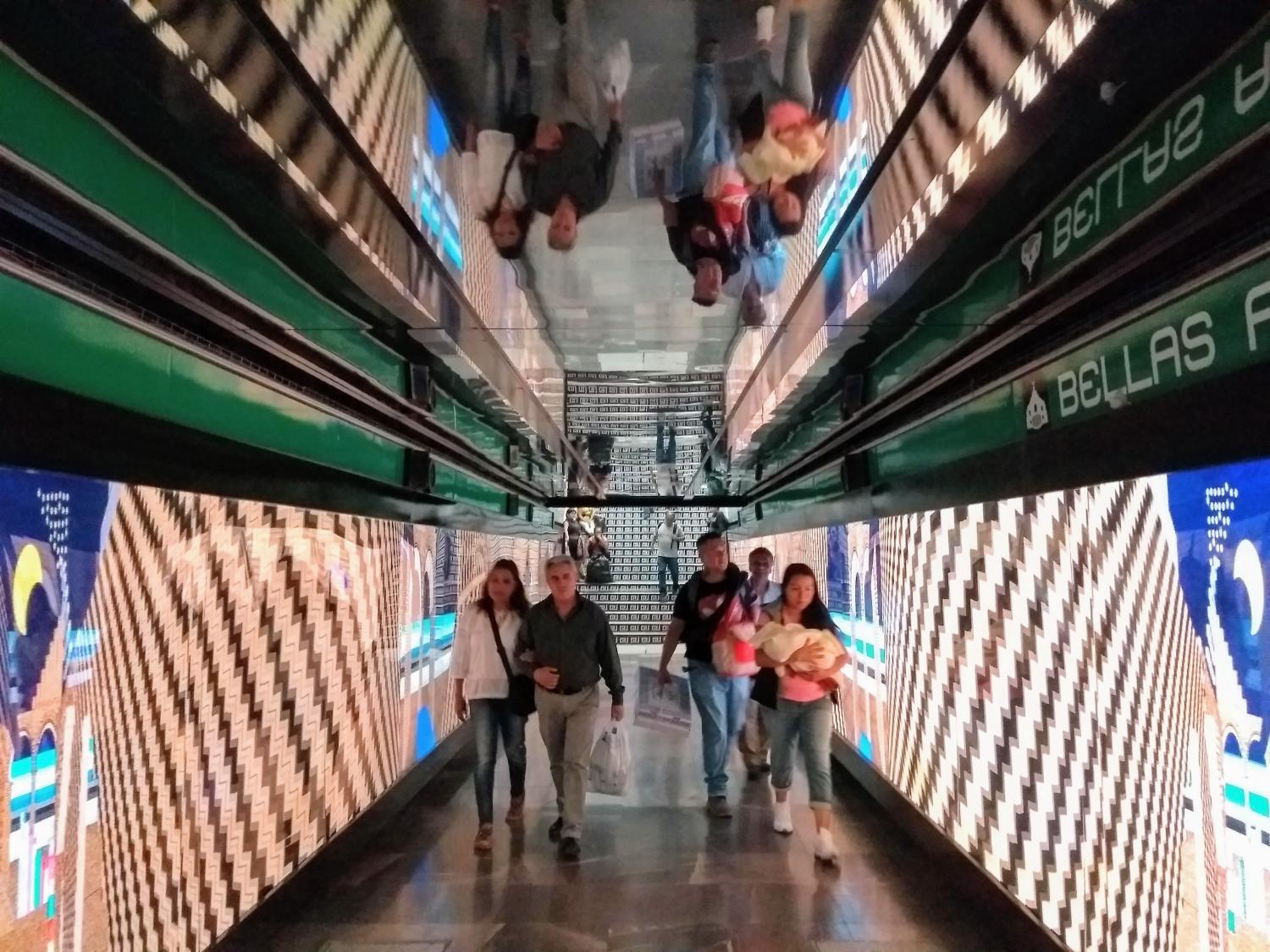 The largest subway in Latin America and the cheapest one in the world is in Mexico City. “El Metro” is celebrating 50 years of operating even when the unexpected — like earthquakes—  hit.

Every day, 5.5 million people ride Mexico City’s subway, with its 195 stations and 140 miles of tracks.

Event promoter José Manuel Manzano is among the users. He said he stopped using his car 10 years ago.

“I think that the subway is way faster and cheaper than other means of transportation,” Manzano said. The ride costs roughly a quarter, as it’s subsidized by the government. 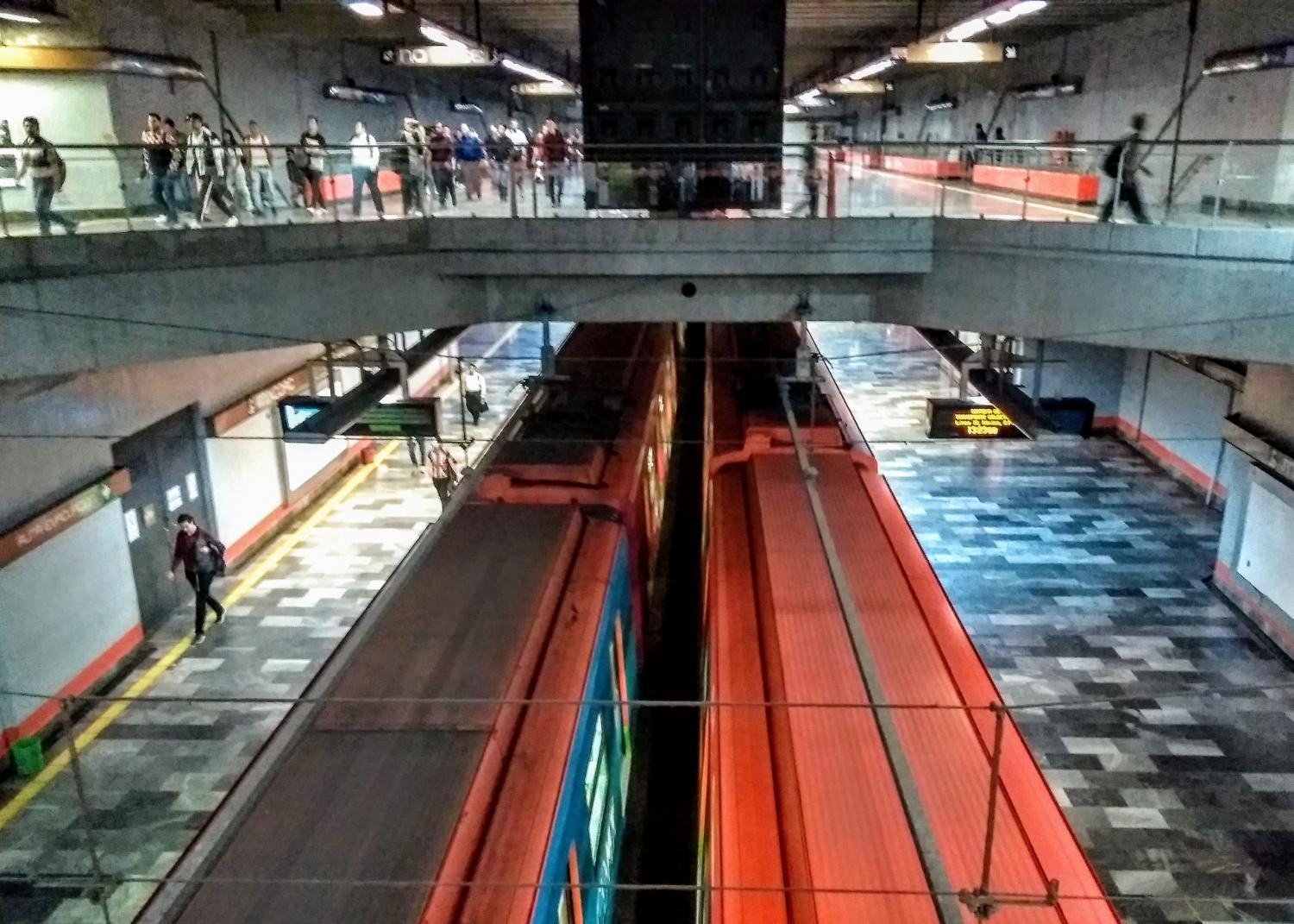 Rodrigo Cervantes/KJZZ
Mexico City's subway is one of the largest in the world and the cheapest one.

Near Mexico City’s airport, right next to the Zaragoza Metro station, lies a 215,000-square-foot subway workshop, coordinated by Guillermo Almaraz.

Almaraz calls himself a “Metro child.” His parents fell in love at the subway, where they used to work. And Almaraz followed their steps.

“We provide service to approximately 31 to 35 trains per year,” Almaraz said.

Here’s where newer trains arrive. As the number of passengers increase, the new cars have broader aisles and bench-style seats to hold more people.

But also some of the first trains from the 1960s get modernized here with systems from the 21st century — even while some of the biggest challenges don’t change.

José Luis Salcedo has been a subway driver for 40 years. He took me on a ride inside the pilot’s booth, which is mainly automated and monitored by the Command Center.

Salcedo told me the rides are typically smooth, except when major incidents happen — like earthquakes.

“You can hear the facilities crackling during earthquakes, but nothing happens,” Salcedo said.

He explained that the underground stations are built like boxes, which makes them among the safest spots in the city. And then he shows me the voice controls he uses to calm the passengers and provide them with evacuation instructions.

But earthquakes are not the worst part of his job.

“Los arrollados,” he said. Which translates to “the run-overs” a term used among subway workers for those who jump or fall into the rails.

Each month, about four people die like this at the subway, according to the Metro’s input. Salcedo said he’s seen two.

The driver said the psychological impact can be overwhelming, but the government provides attention and training to help drivers cope with these tragedies.

The Heart And Brain

Alejandro Varela is head of the Command Center and welcomed me to the facility. It looks like a movie set from the '60s, suitable for "Star Trek" or "Dr. Strangelove."

An alarm sounds, and Varela explains the system is completely automated, alerting for any possible failure, like a brief power outage or, in worse case scenarios, a run-over or an earthquake. 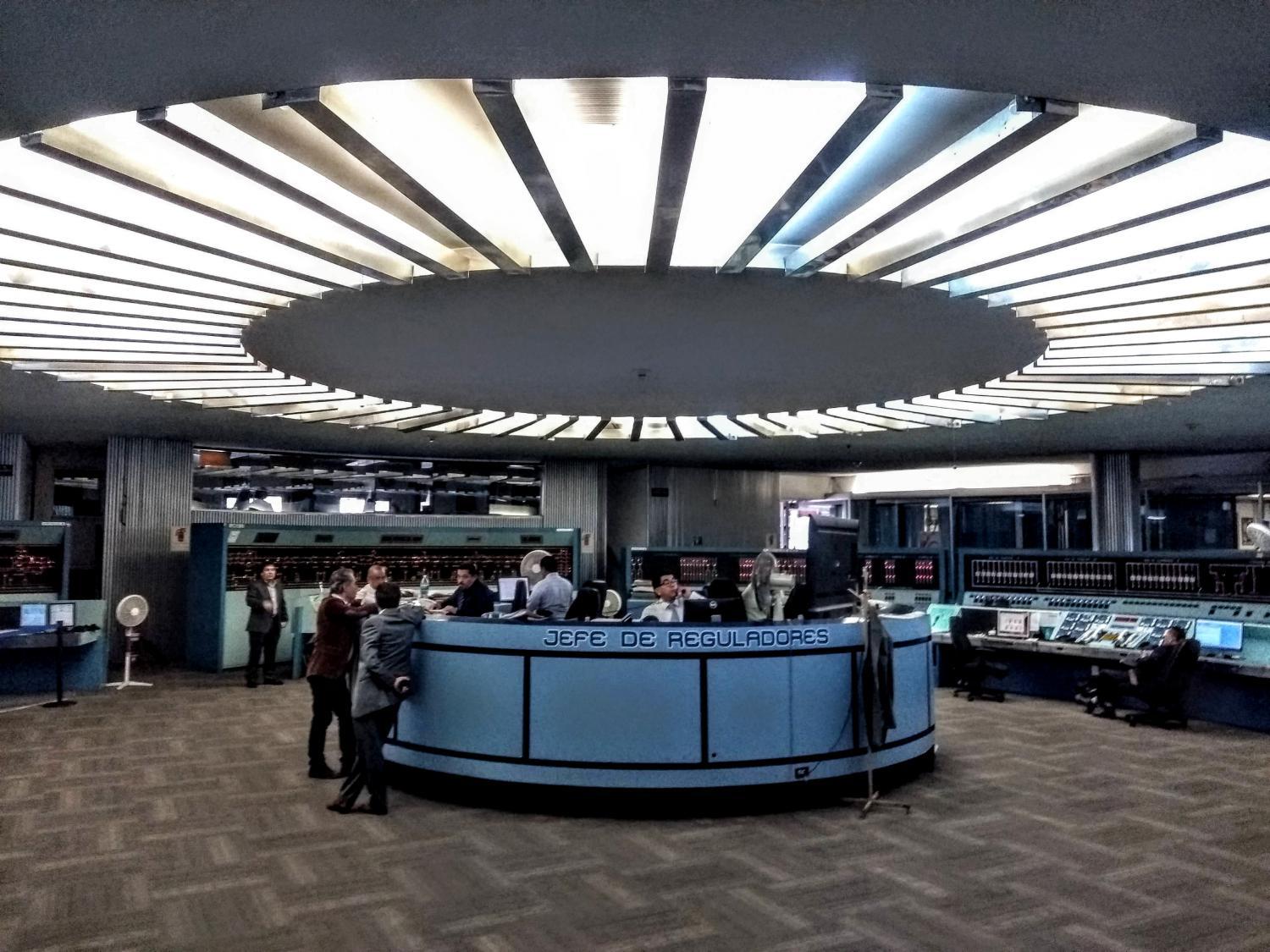 Varela recalled working while the last big earthquake struck in 2017, where hundreds died above ground.

“The first think I did was to think about my family, but I also had to think on all the lives that depend on our job,” Varela said.

And that day, the service was back to normal within a few hours — and even minutes — in most lines.

“The subway is safe, fast, efficient and clean. And I believe that in the future, most cities should definitely have their own metro network,” said Varela.

The Fight In Mexico City’s Main Transportation For Women

About 5.5 million people travel daily on Mexico City’s subway. And one specific group of passengers has gained the metro’s attention: women.

Mexico City’s subway has put some effort to protect female riders, while pushing for gender parity.

Paulina Contreras is a student who uses the subway every day — specifically, the designated car for women. 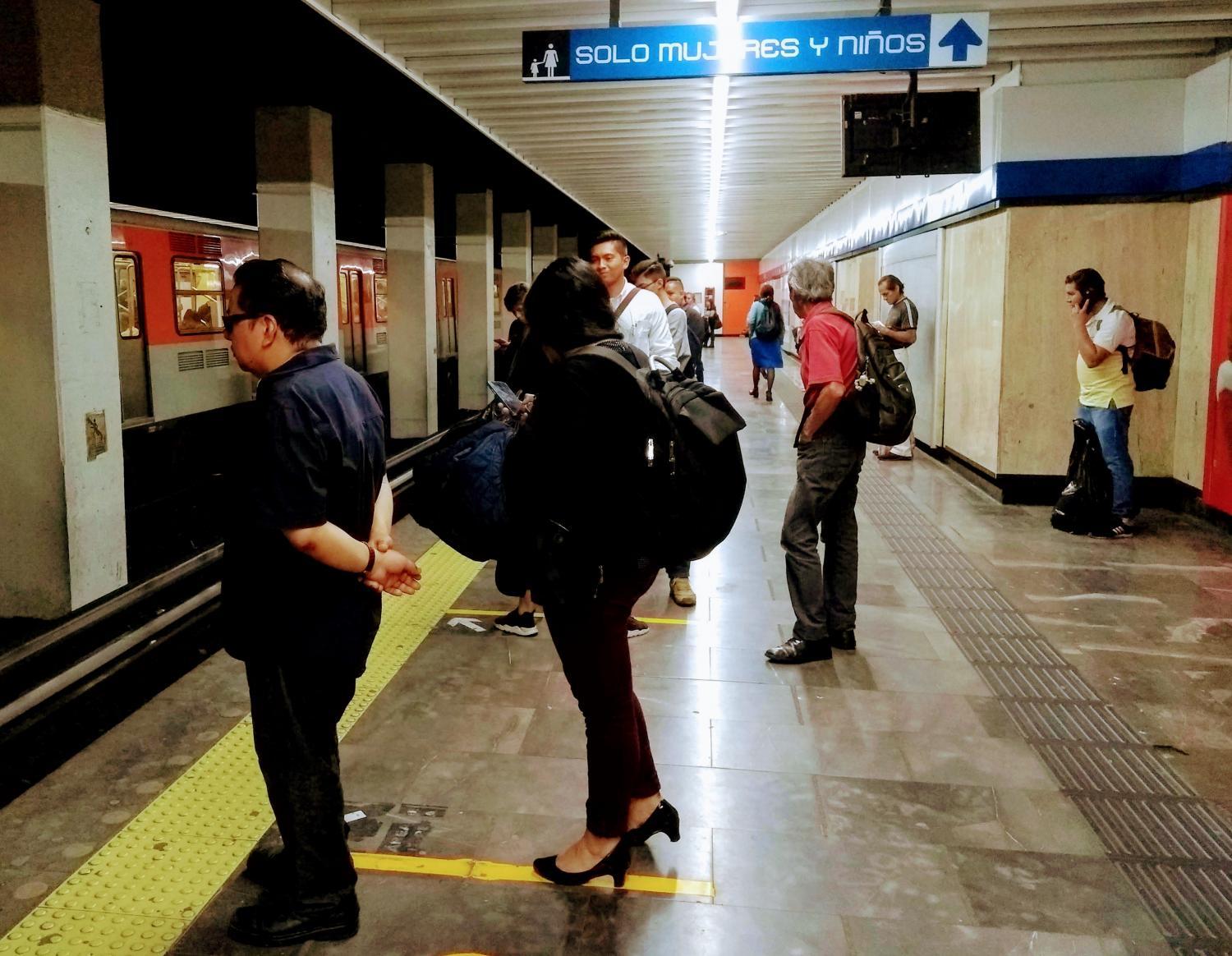 “I used to think the spacial car wasn’t necessary, until one day I walked into a ‘normal’ car that smelled like alcohol,” Contreras recalled. That day, a drunk passenger tried to harass her.

Noemí Martínez, a housewife living in Mexico City, also uses the special car, and says it’s a good idea, although it might get tough sometimes.

Mexico City’s subway has had special cars for women for years. But now those cars function all day long and not only during peak hours. 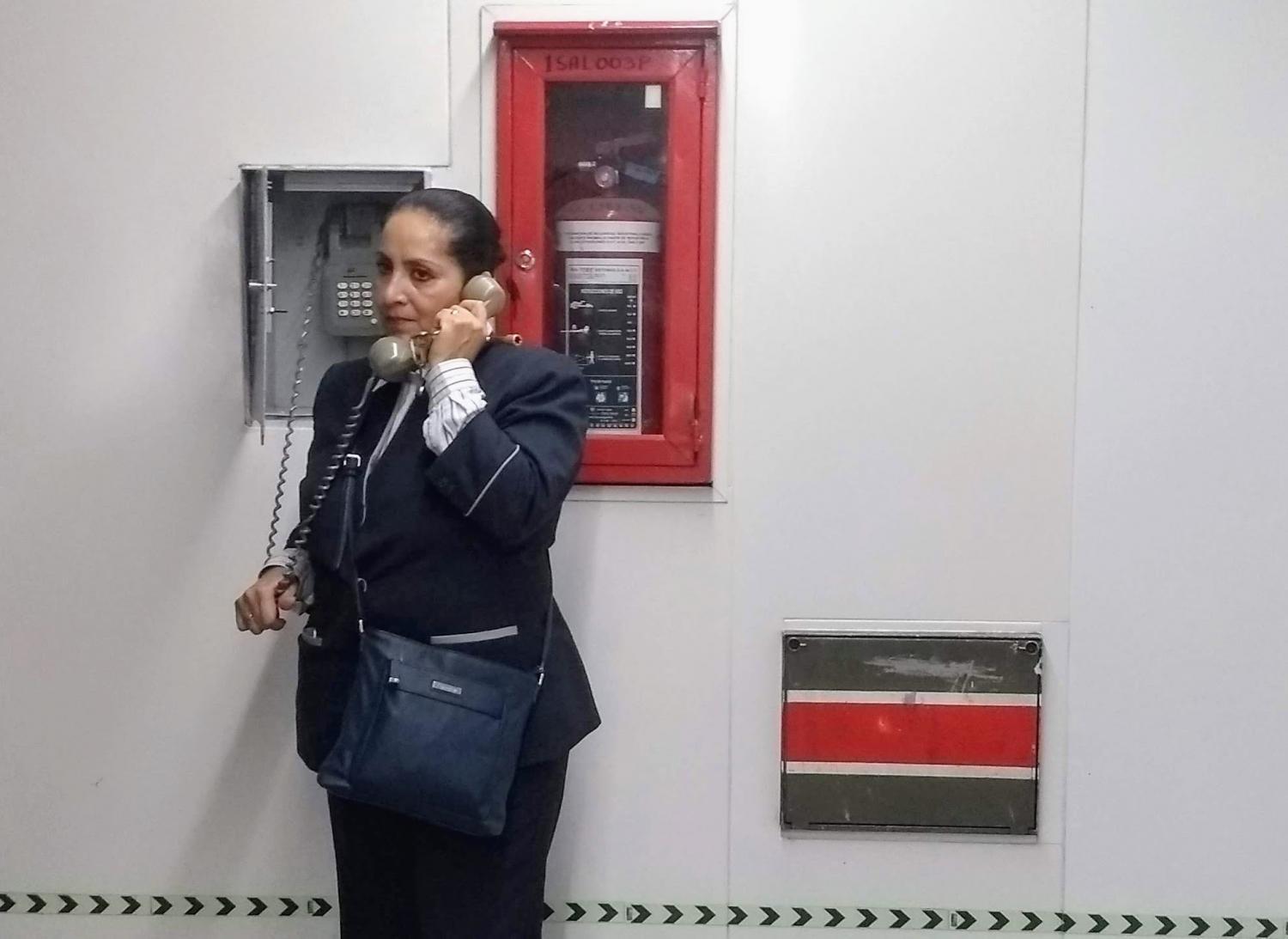 Rodrigo Cervantes/KJZZ
Verónica Mendoza is the supervisor in charge of Mexico City's subway line one.

On the other side of the world, Tokyo's subway has followed the example of women-only cars.

In Mexico City, Vanessa Bohórquez is the Metro’s coordinator of cultural activities. She said the policy is part the subway’s fight against discrimination.

“I think the Metro is the most inclusive institution in the city,” Bohórquez said.

And for Verónica Mendoza, a senior supervisor currently in charge of Line One, it hasn’t been easy.

She started working for the Metro 32 years ago, and later became one of the first female drivers.  Mendoza says back then, women weren’t welcome for most activities.

“Other than selling tickets, which is what I did in the beginning, you weren’t expected to do anything else,” Mendoza said.

The supervisor says there’s more gender parity in her job, but there are also growing incidents of harassment against female passengers.

And Mendoza says that, although things have dramatically improved for women in many ways, a new problem has surfaced.

“Now I seems to me that the ones feeling discriminated are men,” said Mendoza. 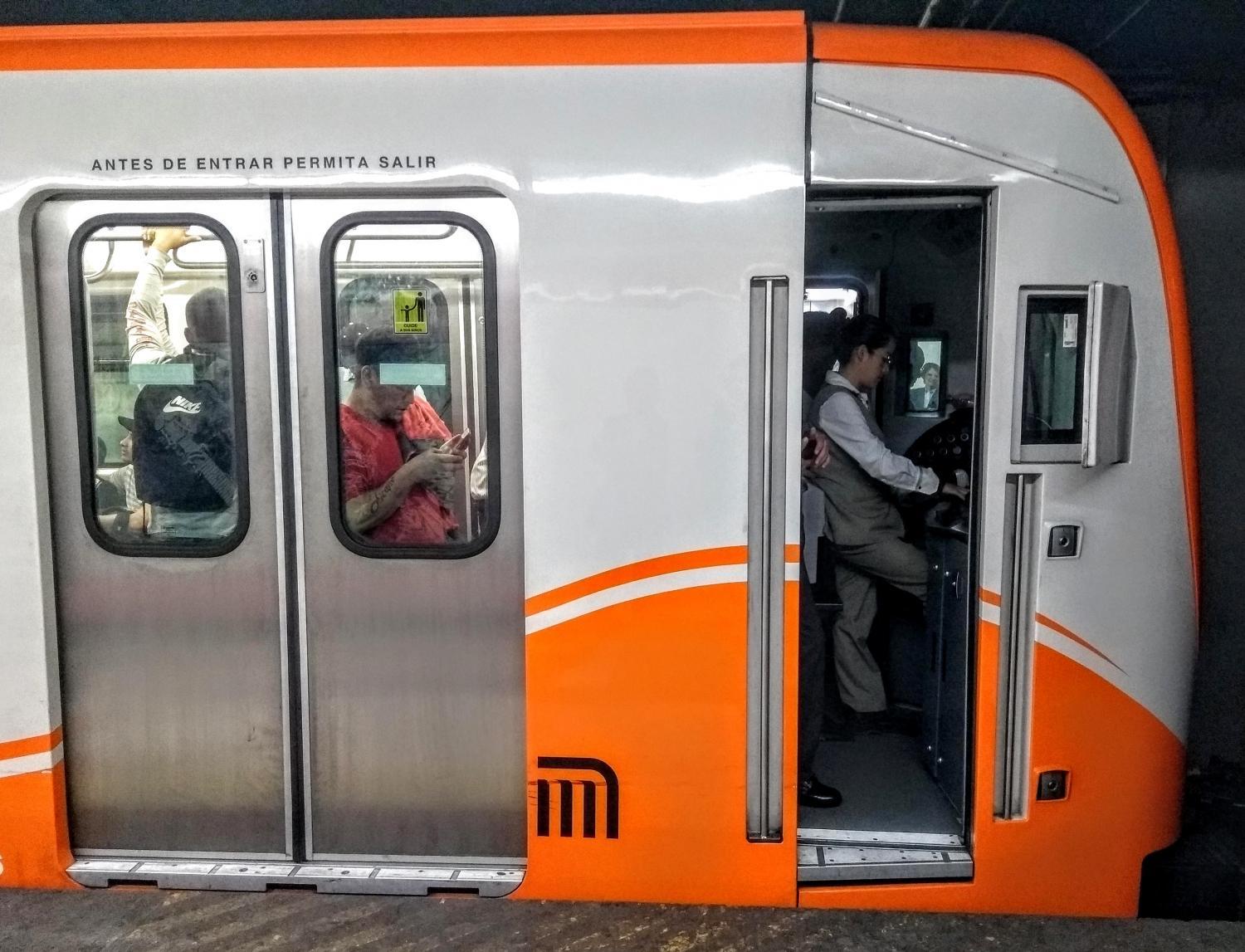 Rodrigo Cervantes/KJZZ
A female driver rides one of the newst trains in Mexico City's subway.
BusinessFronterasMexico