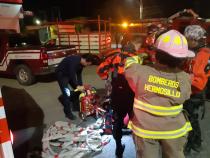 After nearly a week of searching, authorities have recovered the body of an Hermosillo man who fell into a massive sinkhole.

With the help of crews from Mexico City and Ciudad Juarez, rescuers found the body of 62-year-old Julio Manuel Rodriguez early Monday morning. A camera helped locate the body roughly a quarter-mile south of where Rodriguez had fallen into the deep sinkhole, according to Hermosillo Fire Chief Juan Francisco Matty. A rescuer in a dry suit then went into the sewer to attach a line to the body for its recovery.

“This had to be a coordinated effort because it was a very complicated situation,” Matty said.

He’s grateful for all who answered the city’s call for help. About 130 people were involved in the rescue effort, including three Phoenix firefighters who advised rescuers last week.