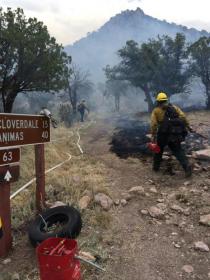 A wildfire has now burned 5,900 acres along the Arizona-New Mexico border. The lightning-caused Guadalupe Fire has now been burning for a week.

Heidi Schewl with Coronado National Forest said there was no rush to put out the naturally started fire.

“When we receive a human caused fire start, what we do is full suppression. That is, put it out. But if it’s a natural ignition, such as a lighting strike like this one, we have the opportunities to manage the fire for resource benefits,” Schewel said.

Schewel said the amount of fire crews are being reduced by 15 percent as the possibly of showers grow over the next couple days.

“Should we see a lot of precipitation and a decrease in fire activity, then more crews will be released. However, with parts of the fire not contained, we will keep some forces in place to take some action, if that becomes needed,” she said.

Those resources remaining on scene include four hotshot crews and two other local fire crews.