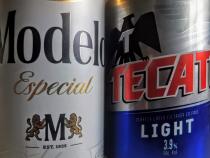 Rodrigo Cervantes/KJZZ
Modelo Especial and Tecate are two of the signature brands owned by Heineken in Mexico.

MEXICO CITY — Mexican beers make up almost 70% of the imported beers sold in the U.S. Beer is one of the top exports and sources of income for Mexico. But the COVID-19 pandemic is affecting Mexican breweries, which is also hitting consumers.

Cuauhtémoc-Moctezuma, the Mexican subsidiary of Heineken that produces Dos Equis and Tecate, is planning to pause its operations, according to sources.

The federal government required companies providing non-essential products or services to shut down temporarily as part of the actions to stop spreading the virus.

Jaime "El Bronco" Rodríguez, governor of the state of Nuevo León, where Heineken has its largest operations in Mexico, said breweries will stop producing and distributing. He also called for a possible dry law in his state, generating panic shopping even in other areas of Mexico. Mexico City's government had to clarify that alcohol will still be sold in the capital.

Sources say the next big player to formally suspend operations is Grupo Modelo, brewer of Corona. One of its plants is producing antibacterial gel donated to public hospitals.

Another obstacle for the industry is at the U.S.-Mexico border, where only so-called essentials are allowed to cross.