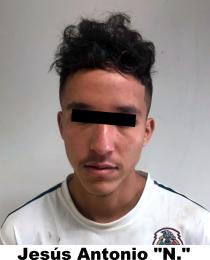 FGJE-Sonora
Sonoran authorities arrested a man identified only as Jesus Antonio in Nogales, Sonora, on July 22, 2020. They say he's wanted in Phoenix on murder, assault and robbery charges.

Working in collaboration with U.S. counterparts, authorities in Sonora say they have detained a man wanted for murder in Phoenix.

The man, identified only as 20-year-old Jesus Antonio, was arrested by state officials in Nogales, Sonora, on Wednesday.

He had an outstanding 2018 arrest warrant from the Maricopa County Superior Court for murder, assault and robbery charges, according to a release from the Sonoran Attorney’s Office.

He was first turned over to Mexican immigration authorities and then to U.S. authorities. The Maricopa County Attorney’s Office was not immediately able to provide additional information.