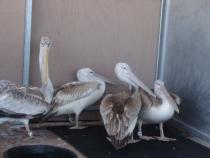 (Photo by Steve Shadley-KJZZ)
These six Pink-Backed Pelicans at the Phoenix Zoo were vaccinated for West Nile Virus and will be taken to their new home at the Fort Worth, Texas Zoo. 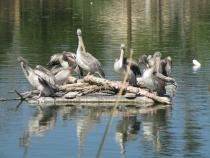 (Photo by Steve Shadley-KJZZ)
Some Pink-Backed Pelicans enjoy the warm sunshine in one of the lagoons at the Phoenix Zoo. 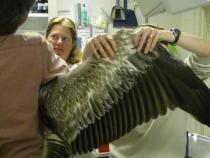 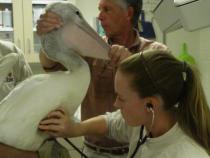 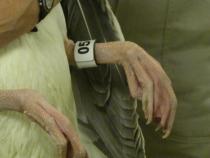 (Photo by Steve Shadley-KJZZ)
The Pink-Backed Pelicans at Phoenix Zoo wear leg bands, and they are chipped so they can be identified by zookeepers.

The warm weather means West Nile Virus season is near. It has spread by mosquitoes and can be fatal to human but birds are the most vulnerable. The Phoenix Zoo is vaccinating some of its exotic birds to prevent the spread of the disease.

There are about 60 species of birds at the Phoenix Zoo. Some of them are extremely rare, and zoo keepers are worried they could come down with West Nile Virus.

John Sills is the bird collection manager at the zoo.  He was driving around in a golf cart and headed for the lakes where the pelicans live.

"It’s actually a fantastic place for pelicans, so I’ll show you,” said Sills.

He stopped at a spot where the birds are fed every morning and rings a dinner bell.

The pelicans actually respond to the sound. Sills said you ring it, and they come right over.

"And, they wait, some more patiently than others, but then we toss the food to them," he said.

These Pink-Backed Pelicans are from Africa, and they eat frozen and fresh fish. The Phoenix Zoo has caught six of the birds and has agreed to send them to a zoo in Fort Worth, Texas that wants its own collection of pelicans. But, before they go, they have to be checked out for sickness or injuries.

The Phoenix Zoo’s bird hospital is full of animal handlers and veterinarians. Kristen Phair examined a Pink-Backed Pelican while two zoo keepers hold it in a bear hug. The huge bird seems calm despite the commotion around it.

"Alright, let me just run my hands down the neck and make sure everything feels like it’s in place. And, then we also try to figure out what body condition the bird is in, whether they are perfect weight, overweight or underweight,” said Phair.

Turns out this adult pelican is in pretty good condition although parasitic round worms have been found in its digestive system. Phair draws blood from its leg and gives the bird a shot in the breast.

“Now we are giving West Nile Vaccine. This is part of what the receiving institution requested,” Phair said.

The Fort Worth Zoo will not take these pelicans until after they are vaccinated against West Nile.

Veterinarian Gary West said the Phoenix Zoo has not had any problems with the disease since it first hit the United States more than a decade ago. But, the St. Louis Zoo has lost some birds to West Nile, two flamingoes died at the New Orleans zoo, a penguin in in New York died and 12 birds were killed at the National Zoo in Washington, D.C. Here at the Phoenix Zoo, West has improvised with drugs in hopes of keeping the Pelicans virus free.

"There isn’t a Pink-Backed Pelican West Nile vaccine. There’s not a bird vaccine against West Nile Virus, but we do have a pretty good one for horses and so we use that across species lines, and we do use that to vaccinate birds,” West said.

He said the zoo’s raptors like hawks, falcons and owls have received West Nile shots. So have the vultures, Thick-Billed Parrots and Bald Eagles even though West said there is no proof the vaccine is effective in birds.

The Phoenix Zoo’s equine species including zebras and horses have also been inoculated. The zoo has invested a lot of time and money in its animals, and West said protecting them against disease is a full time job.

“There’s a huge aspect of the zoo behind the scenes that goes into animal health, conservation and education that is really the big mission of zoos and I don’t think people really appreciate that part of zoos,” West said.

As for the six Pink-Backed Pelicans on their way to Fort Worth, they will be quarantined for 30 days before they are introduced to the other animals in Texas.