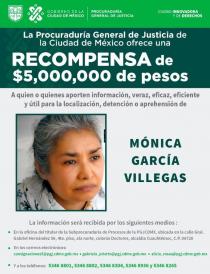 Mónica García was arrested in a restaurant in Mexico City. While authorities say they acted on a tipoff, García’s lawyers say she surrendered.

"Miss Mónica," as students used to call her, got added to Interpol’s wanted list in 2017, a few months after the Sept. 19 earthquake. Mexican authorities offered a $260,000 reward to find her.

García is accused of homicide and negligence after media investigations revealed that the school was poorly built and had fake permits.

Parents of the deceased children celebrated García's arrest but also expect authorities who allowed the construction to be arrested.

Owners of dozens of other collapsed or damaged buildings in Mexico City still face allegations of corruption or negligence. The Mexico City campus of Tec de Monterrey college, a few miles away from Rébsamen elementary and where five students died, is being partially rebuilt, while facing questioning from some parents and students.

Back in 2017, Mexico City's current mayor, Claudia Sheimbaum, was head of the district where the Rébsamen school was located. She became the mayoral candidate shortly after the catastrophe in the midst of controversy.