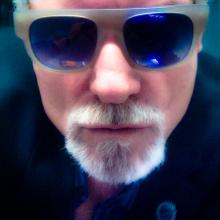 Chazz Rayburn is one of several creative personas of Charles Reinebold, who has been an award-winning journalist, marketing and public relations professional, and radio announcer during his 40 year career.

He began his journalism career writing for the Casa Grande Dispatch and Phoenix Gazette, and won an Arizona Press Club award for feature writing in 1973.

In 2006 he became Media Relations Manager for the Maricopa Community Colleges’ District Office, and began working part-time at KJZZ. He retired from the district position in 2011. From 2014 to 2016 he worked part-time for Mesa Community College, writing student features, speeches, video scripts, web and advertising copy, as well as editing, video narration, and becoming the on-hold “voice” for MCC’s telephone system. Reinebold worked heavily as a writer and editor on MCC’s national award-winning 50th Anniversary Celebration, which included print, web, video and exhibition components.

Chazz Rayburn emerged publicly decades ago, when Reinebold began working weekend announcing shifts at the first FM Radio station in Casa Grande, AZ, and decided his real name didn’t roll off the tongue very well. Working part-time, he went from turntables to CD’s and played music that ran the gauntlet, from country to rock to adult contemporary.

Chazz joined KJZZ in 2006, and hosted weekend afternoon and evening NPR programming.  In 2016, he became the regular host of Monday’s late night classic jazz show from 11 pm to 1 am.

“I grew up with music in my life,” he said. “My father loved jazz, and his sax-playing father, my grandfather, led his own big band that toured the Midwest in the 1940’s. My mother toured as a featured singer in church choirs throughout the south when she was a teenager.”

Reinebold is also a published poet, musician, composer, photographer, and videographer.  He has written and professionally produced more than 50 of his own compositions over the past 25 years.

“Even though I was a media professional all those years, I still surrounded myself with music, at work and at home,” he noted. “I’ve been writing music, poetry and prose since I was young, and that has rarely waned, despite the time constraints as an adult.”

“I am truly blessed to be working at KJZZ. Now that I’m semi-retired and working here, my entire life is music, and that’s how I’ve always wanted it.”