Tracing The Migrant Journey: On The Ground In Honduras

During the month of August, reporters from KJZZ's Fronteras Desk will be taking us to some of the key places migrants are traveling in hopes of a better life in the U.S. The series "Tracing the Migrant Journey" kicks off in Honduras. 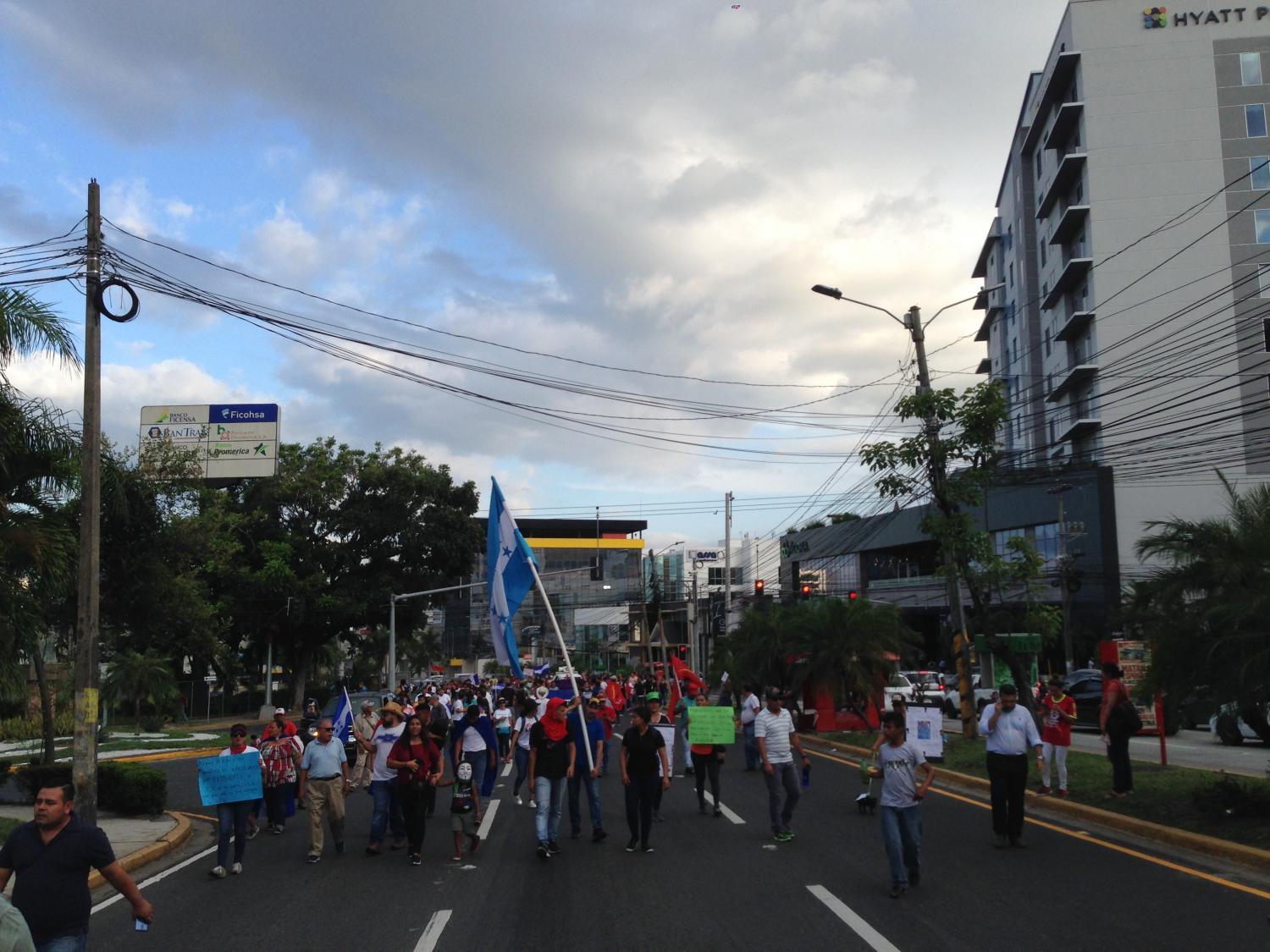 LAUREN GILGER: Today we're beginning a series that takes an in-depth look at migration from Central America. Reporters from our Fronteras Desk are traveling to seven key points along the route. Many migrants take in the hopes of finding a new home in the U.S. We're calling it "Tracing the Migrant Journey," and we're going to start this morning in Honduras where senior field correspondent Jorge Valencia has been reporting for the last few days. Good morning, Jorge.

GILGER: So start by just describing for us where you are and what brought you there.

VALENCIA: OK, so I am in the second-largest city in Honduras. It is called San Pedro Sula. To give you an idea of what it feels like to be here, it's just like a big slab of concrete right in the middle of the tropics. It's a big city, it's got about 800,000 people. And it's humid. And the reason why we chose to start here is because Honduras, according to the numbers we've seen from the Mexican government from the U.S. government, Honduras accounts for about half the people who are traveling to try to reach the southwestern border to petition for asylum, many of them. And San Pedro itself is hub. It's a place where many people have left. It's a place that has seen much violence, much crime. People are fleeing here, and they're also people that to get to the U.S. from Honduras, at some point, they pass through here.

GILGER: So tell us who you've met since you've been there. 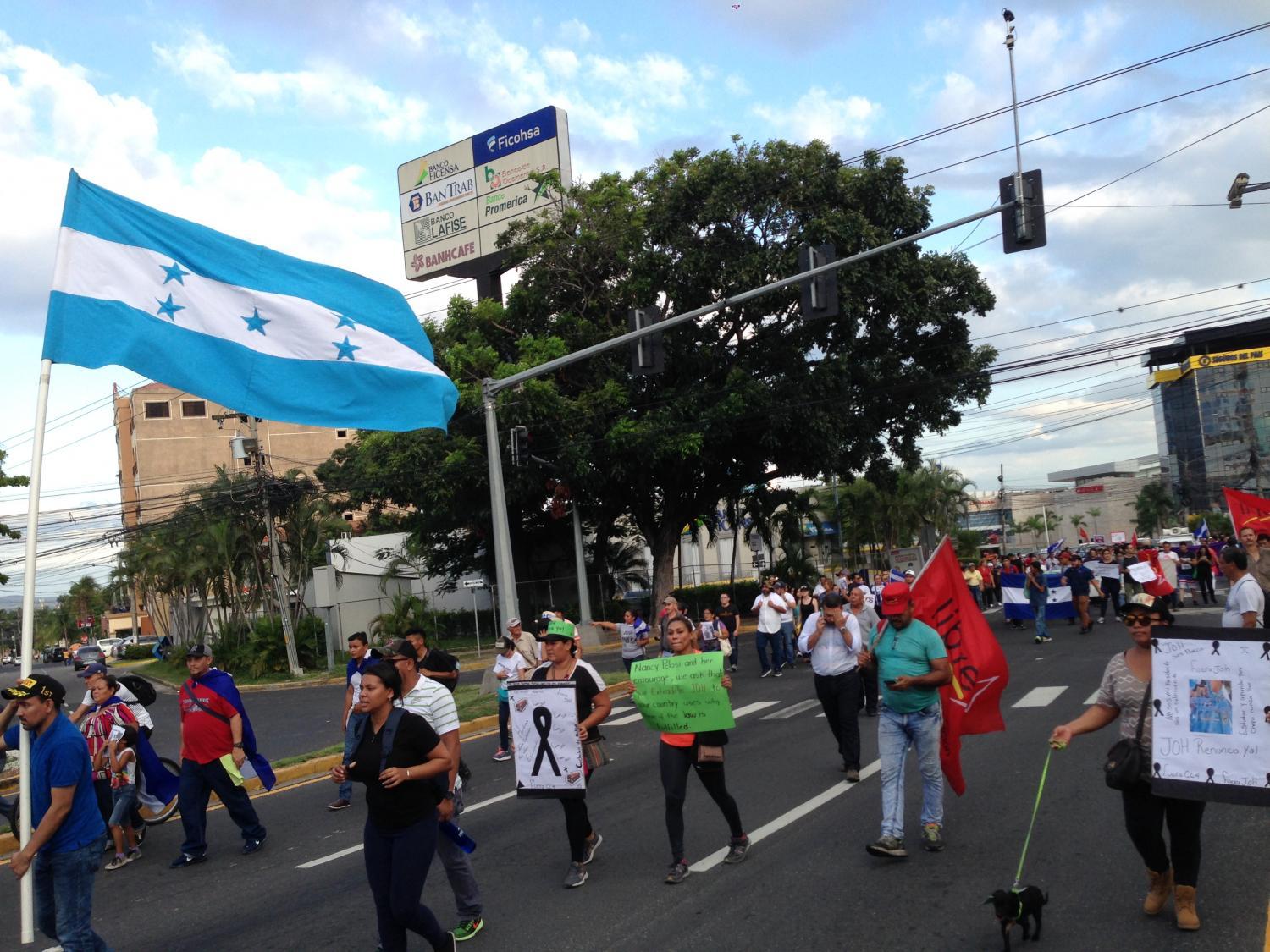 VALENCIA: Well, I've met lawyers. I've met students. I've met people who are unemployed. And something that is unavoidable are protests, almost on a daily basis, against the president. I was just at one Saturday. So one of the chants that are very common here, it's "Fuera JOH!" — to paraphrase, it they're saying, "Out with the President Juan Orlando Hernandez." The president has been the focus of many accusations of corruption, of having received money from drug traffickers to fund his presidential campaign. And, actually, most recently he's is the focus of an investigation in New York by the DEA. And so people are saying that many of the problems that we see here, like we're talking a second ago about violence — gang violence, many of the problems we see — unemployment, inflation — they all get traced back to a corrupt government. So people are saying we want the president to leave. And these are protests that are here in San Pedro, Tegucigaloa, the capital, and many towns across the country.

GILGER: So you're talking about accusations of government corruption and the fact that Honduras is the place that is driving a lot of people up toward the U.S., right? So what's the connection there? Why are people leaving?

VALENCIA: OK, so for that ... one of the people who I met, his is Jesus Chevez. He's a high school student. He's 14 years old. He's also a singer-songwriter. I just want to play a little bit of a song that he played that that explains what you're asking me about.

GILGER: So, Jorge, what's he saying in the song here?

VALENCIA: I'll summarize it. In these two verses, what he's saying is people can't find work, there's no jobs, people can't get medicine at public hospitals. And so we want the president to go. We want Juan Orlando Hernandez to go. We want the people to stay. So this speaks both to the reality of what many people here are living in and then also the realities and the people who are here see. They see their neighbors, they see their friends who are going to the U.S., and they're saying, "We don't want you to go. We want you to stay. The problem isn't you. The problem is the president."

GILGER: And there was also a high-profile visit from the U.S. government there this weekend, right? 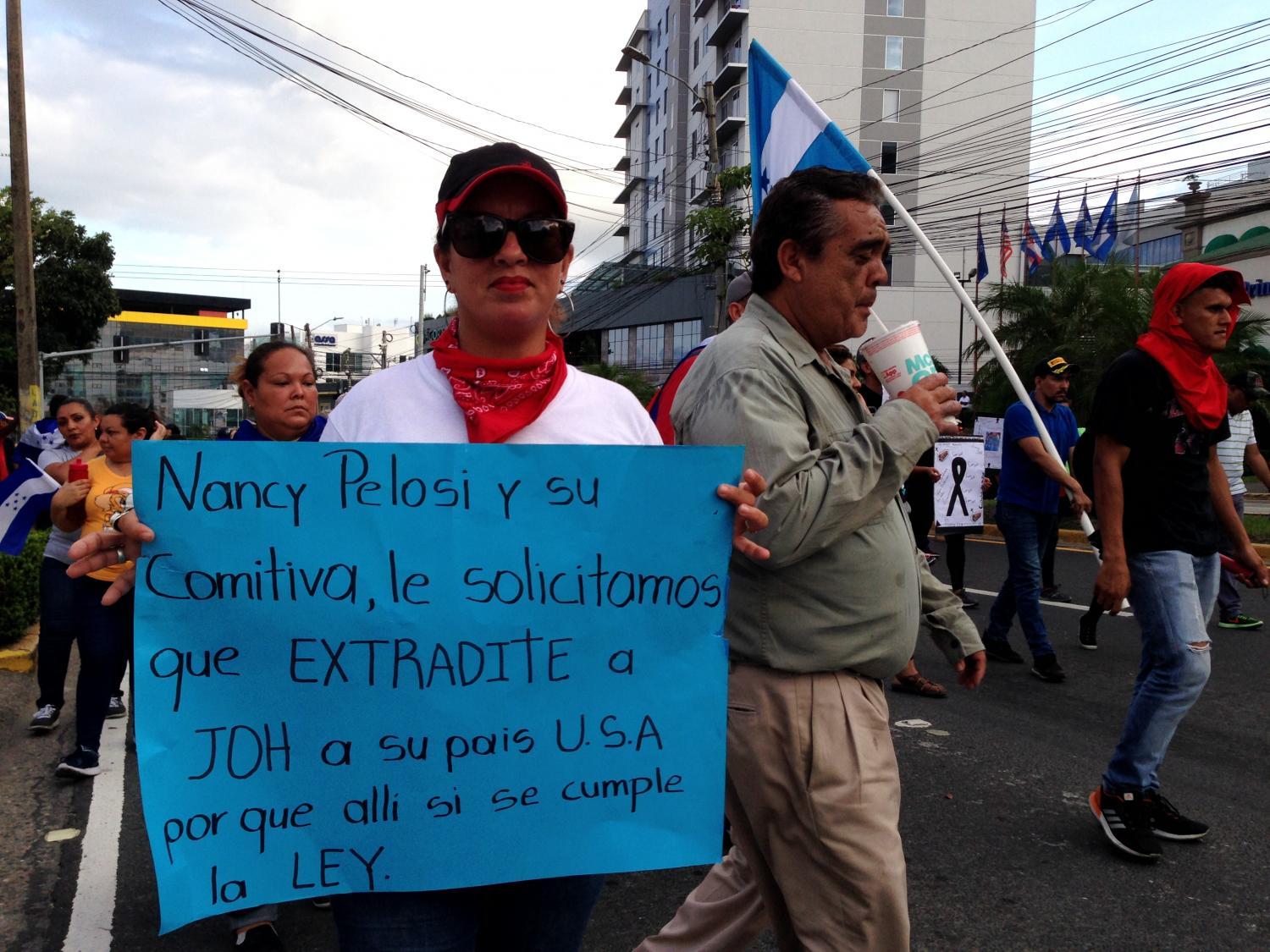 Jorge Valencia/KJZZ
A protest in San Pedro Sula, Honduras, in August 2019.
VALENCIA: Yeah. There was a delegation from Congress, and it was led by House Speaker Nancy Pelosi. And, notably, she didn't — they didn't meet with President Juan Orlando Hernandez. In fact, they met with his with his chancellor, with his foreign affairs minister. And they also met with at least one of the doctors who leads one of these activist groups that are denouncing the president. And here's a little bit of what Speaker Pelosi said at a press conference in the capital on Saturday.

NANCY PELSOSI: We shared therefore to our concerns that we were hearing about the lack of justice and the presence of corruption in Honduras.

GILGER: All right. So, Jorge, we're also going to hear again from you tomorrow on The Show. So what what can we expect next on this trip through Honduras that you're taking?

VALENCIA: Tomorrow I want to introduce you to some of the people who I've met here. People who work at factories, people who have tried to go to the U.S. unsuccessfully, people who have been deported from the U.S. And I think that meeting these people at their homes, at the bus station, where many people were leaving from, I think that this is indispensable to understand why people are leaving. And just to give you a little bit of a hint, I haven't met a single person who actually wants to go. People aren't leaving because they want to go, but because they're desperate. So those are the people who I would introduce you to tomorrow.

GILGER: All right. Well, excited to hear it. That is KJZZ's Jorge Valencia in Honduras. Jorge, thank you.

MARK BRODIE: All this week and next we're taking an up close look at migration from Central America. As part of a special series from the Fronteras Desk, "Tracing The Migrant Journey," we're hearing firsthand, on-the-ground accounts of what it's like to travel thousands of miles in the hope of finding a new home. Today we have senior field correspondent Jorge Valencia on the line from Honduras. Jorge, good morning.

BRODIE: So we spoke with you yesterday, but can you remind us briefly of where you are and why you're there?

VALENCIA: Yeah, I am in a city called San Pedro Sula. It is the second-biggest city in Honduras. And the reason why we came to Honduras, and to this city in particular, is because Honduras, in the past year, has represented about half the people who are migrating through Mexico trying to reach the southwest border. And San Pedro Sula, in particular, we wanted to come here ... is because many people come through here. Many people are fleeing here, this city or areas surrounding it. So for the purposes of this conversation, there are many things to be said about San Pedro Sula. I mean it's a big city — 800,000 people. But the main thing to be said for the purposes of our conversation right now is that it is a very dangerous place. It is has been one of the deadliest cities in the world, outside of a war zone, for several times in the past few years. And so many of the people who we have met in our reporting leading up to this — people from Honduras traveling northbound — that many of them site and some sort of violence as the reason why they're leaving.

BRODIE: And, am I right that you've met at least a couple of folks who told you that their life had taken a turn because of gangs?

VALENCIA: Yeah. Many, many people. And in fact there's one particular family that I wanted to introduce you to. And I'm not gonna give their names, because they were very, very scared of being identified by the gang in the neighborhood where they used to live in. The family that — the situation that happened to them, this is a working-class family. And the neighborhood where they used to live in was — is controlled by a gang. You basically need permission by this gang to enter the neighborhood. And the gang found out that that the mother and the family went to another neighborhood semi-regularly that's controlled by a different gang. Because basically it's just where her mother lives. But the gang doesn't like that, because they see that as a possibility of somebody carrying information from one side to another. And so the gang told them, "You're going to this other neighborhood we we're giving you 24 hours to leave this neighborhood or we're going to kill all of you." And so there are quite, quite rattled by this. They didn't even take 24 hours. Within three hours that they were gone — they left everything in their house. The house is abandoned. [Speaking in Spanish.] The father here. We're talking at his doorway. And he was saying he's sorry just pointed to the ground where we're standing. And he said, "If when I leave here in the morning, I don't know if I'm going to come back. I don't know if I'm going to get to come back and see my children at the end of every day." And that's that's what he feels like every day. And so that is the type of situation that many people here are leaving. This is actually a pretty common story, which is part of why I thought it was so compelling and so useful for us to hear in order to be able to understand what's happening here. 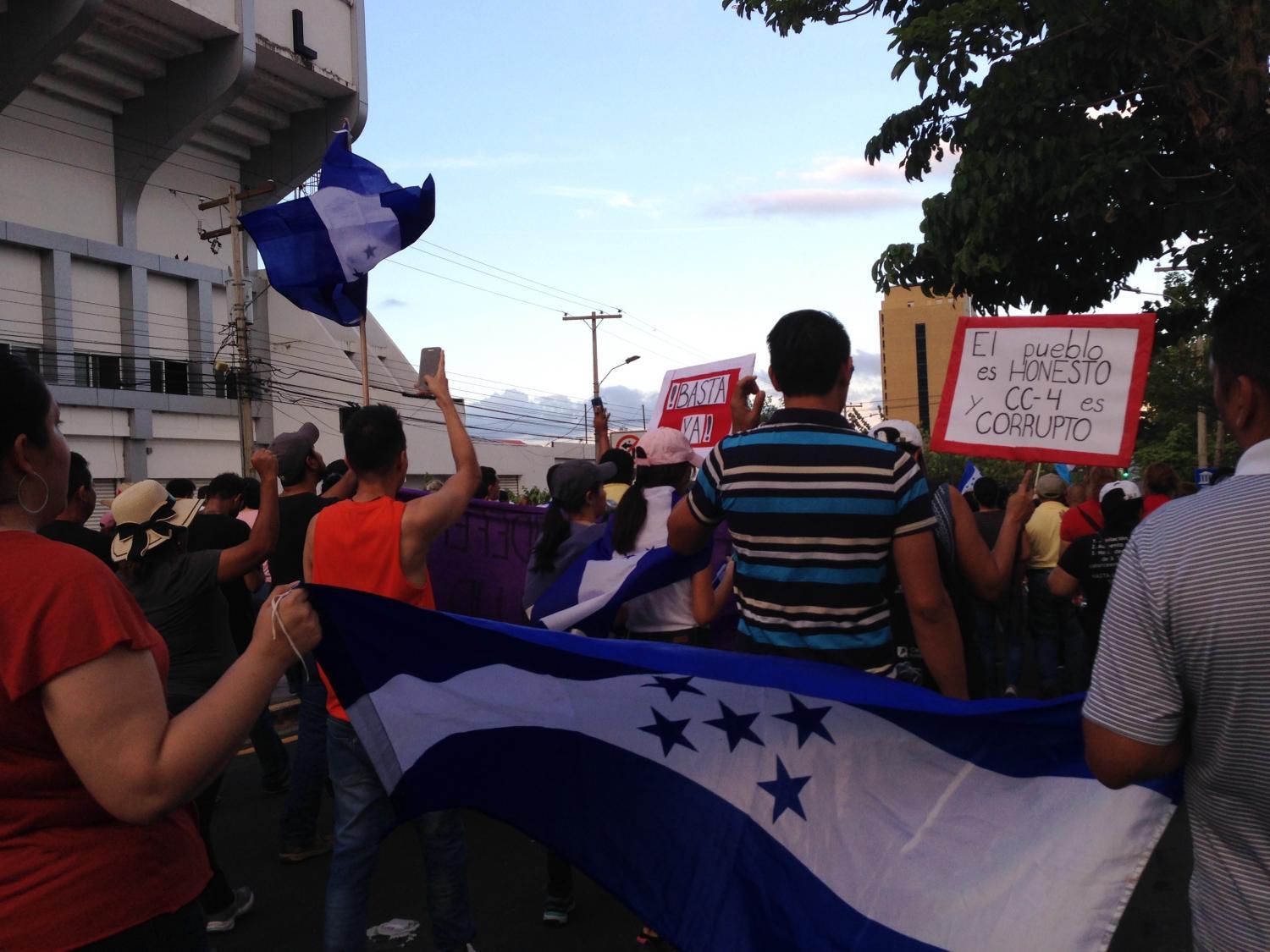 BRODIE: So, Jorge, is gang violence the reason why so many people from Honduras are fleeing the country?

VALENCIA: That's what I thought before coming here. We've been reporting on migration from here for several months now. But when I got here, I learned that there have been protests almost on a daily basis against the president — teachers, doctors. So a lot of people are saying that a lot of the problems in the society are ... they draw the line directly back to corruption from the government. There is one teacher who I met. His name is Jorge Barahona. And he said that he's had basically enough students leave in the past year to fill up like one classroom. He said he's had about 500 students that he sees in the entire week, about 30 of them left the country with — by themselves or with the family in the past year.

VALENCIA: Barahona, as we were talking, he got quite emotional. You can sort of hear it in his voice, because he said that he is very, very upset about this. He doesn't want his students to leave. He doesn't want his neighbors to leave. And it makes him very, very sad that, in his view, like a generation, or much of a generation, isn't getting to grow up in their country.

BRODIE: All right. That is KJZZ's Jorge Valencia, on the road in Honduras. Jorge, thank you.

BRODIE: And tomorrow here the next installment of "Tracing The Migrant Journey." That'll be from about 400 miles north of where Jorge is, on the Guatemala-Mexico border.