LAUREN GILGER: Like a lot of Arizona, Native American reservations in our state rely heavily on tourism. But with the pandemic, fewer people are traveling, and tribal communities have been hit harder than most by the virus itself. So where does that leave Native American businesses in our state? To find out, I got a hold of Geri Hongeva. She's the board president of the Arizona American Indian Tourism Association and a member of the Navajo tribe. And she told me for some tribes, tourism is their main source of revenue.

GERI HONGEVA: They have a travel destination, plus they have tour guides. Along with that, they have vendors or artisans, maybe even the food industry that's all connected to these top tourism locations within different reservations in Arizona. So tourism is a huge part of the economic development within the Native American communities, and a lot of people rely heavily on this industry.

GILGER: So obviously, though, since March we have been in this pandemic — tourism has been at a near halt everywhere. And we know also at the same time that Native American communities have been disproportionately affected by COVID-19. How has the stoppage of a lot of tourism activity impacted both the Navajo Nation and other communities in Arizona?

HONGEVA: Well, speaking from Navajo Nation up here, I'm near Flagstaff and Navajo Nation being all of northern Arizona, north of I-40. And it has come to a halt, really. For our tribe, the Navajo Nation president's office have been enforcing curfew hours as well as closures of different businesses and enterprises. So depending on what industry you're in, for example, if you want to see one of the tribal parks like Monument Valley or and Antelope Canyon, all of those businesses have been completely closed, meaning they're not even part of the curfew hours. They have had no revenue. They have not made any money since COVID, which happened in our area, in our neck of the woods here in northern Arizona, around about the middle of March. So, for example, the gaming industry, the Navajo gaming enterprises, have closed all of their casinos in Arizona and three in New Mexico. And they've not been open for business since March. And they're still closed. So the casino industry here in northern Arizona is at a halt. I do believe the southern tribes, their casinos have been opened. Their occupancy level, I believe they're using the 50% rule, meaning they cannot have a full floor on the gaming floor. So they're still drastically reduced in revenue because they do have to follow the occupancy rules for COVID-19. 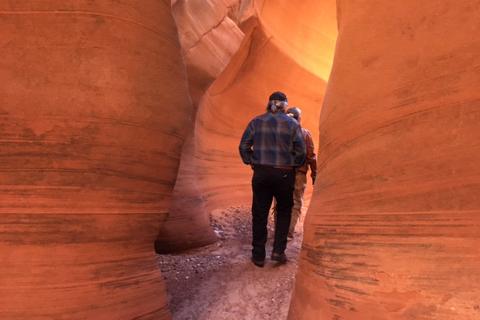 GILGER: So what are you hearing from tribal leadership, from businesses on these, on these reservations and across the state? How badly are they hurting?

HONGEVA: Well, like I said, I'm speaking for Navajo tribe, which is my tribe. It's, it's detrimental. I mean, we're at the point, especially within our Navajo gaming enterprises, if we don't reopen soon, I don't know how we are going to bounce back into the gaming industry. And there's a cost of rehiring people. There's a cost of making sure the facility's back up and running — the slot machines, the programing. There's a lot that has to happen before the casino actually opens. And that's the same for any business. I do know for the tribal parks like the Navajo Parks and Recreation Department, they oversee five tribal parks. And the same with them. They'd have to get the staff back into these properties, make sure the water's running right, utilities are back on. There's a lot of preplanning that has to happen, and those things cost money.

GILGER: So what kind of support from the state or from the federal level has helped mitigate this? Is any of that money going specifically to tourism efforts to help businesses?

HONGEVA: Yes. Yes, there is. I do know that there's a good percentage that are allotted to, let's say for example, an artisan who would normally sell jewelry year round, and that is their only income. The tribe has been helping individuals, especially if they're self-employed, being an artisan or a business. Also, small businesses, guided tours like, for example, our tour guides up in the Monument Valley and Canyon de Chelly — you know, that's their livelihood. That's the only way that they can keep their families, resources and bills paid, and that's their only income. But now it's at halt. The tribe is giving them money as well. So there is a percentage of money that the tribal government and federal government is helping with that.

GILGER: Final question for you, Geri. In your mind, what do you hope the industry looks like on the other side of COVID? Like, how easy or difficult will it be to restart and to invite tourists back into these communities that have been so hard hit?

HONGEVA: In my opinion, and this is just my opinion, I think that it's going to take a little bit of a slow start. But with anything, with enough promoting and marketing, once we get through COVID and there's a remedy for all of this, I do believe that the 22 tribes in Arizona will get back on their feet because we're resilient. Yeah, there's a lot of devastation happening in the families that are experiencing COVID or losing a family member to COVID. You know, we feel everybody's pain in that, and we go through that together. But along with that is staying strong and also healing through the songs and through the prayers. And each tribe is that way. You know, I've talked to other tribal members, and they're continuing with the ceremonies. And this is part of who we are. Yes, now we have a huge impact like COVID, but we do remain strong through our songs. We do remain strong through our ceremonies, and we do remain strong through our language. And like I said, I believe we will bounce back.

GILGER: All right. That is Geri Hongeva, the board president of the Arizona American Indian Tourism Association. Geri, thank you so much for coming on The Show to talk about this.

HONGEVA: Thank you so much for inviting me.