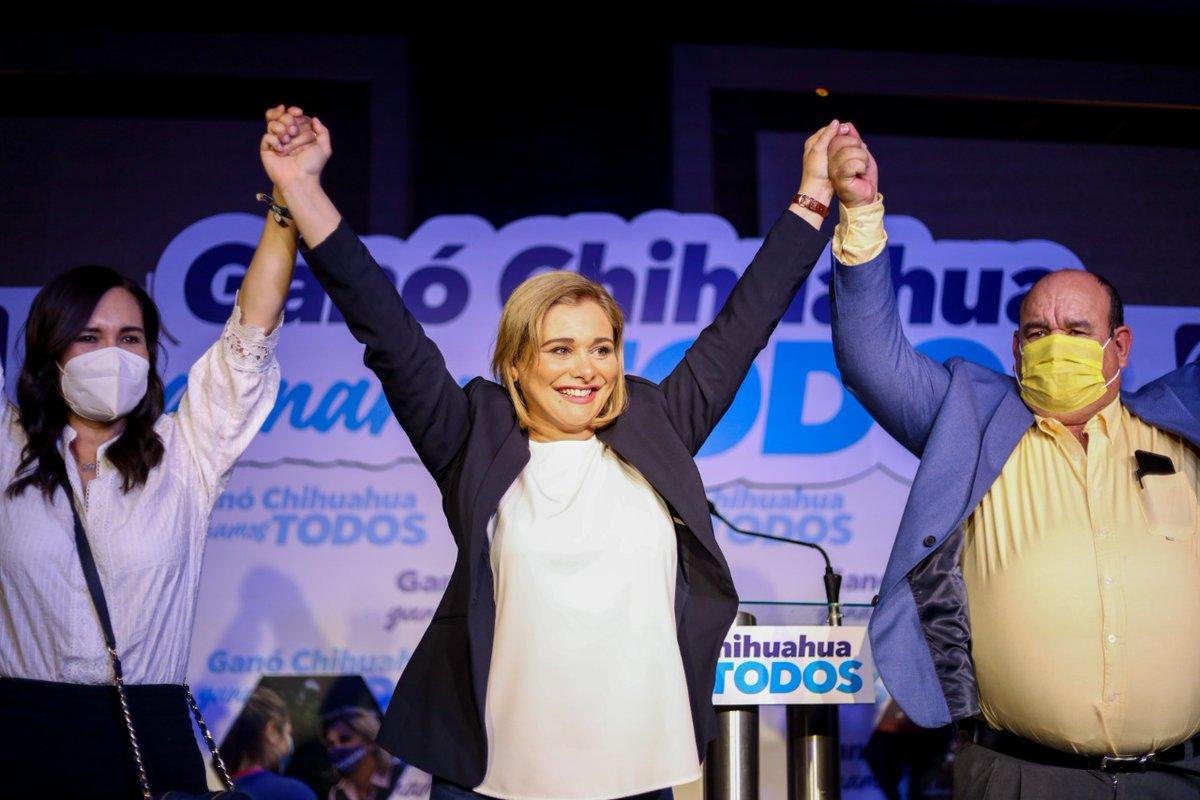 Maru Campos Campaign
Maru Campos is one of six women elected governor in Mexico on June 6, 2021. She is set to be the next governor of the state of Chihuahua.

Supporters cheered as preliminary results made clear that six women had likely been elected governor in Mexico’s June 6 elections — a historic breakthrough for women’s political representation in the country.

The wins will put women in the top spot in seven of Mexico’s 32 states. Until now only nine women have ever been elected to the office — and only two at the same time.

“It’s great, because exactly what we want is for more women to also be in relevant positions of power and decision-making,” said Tania Martínez, coordinator of the Social Innovation and Citizen Participation at the Instituto de Liderazgo Simone de Beauvoir, a nonprofit that provides leadership training with a feminist perspective to women and marginalized groups across Mexico. “For us, having women in those roles is foundational, because although we understand that doesn’t mean they will automatically push a gender agenda, more participation means an important perspective in our political spaces.”

She said women’s gains in governors races are particularly important because of the power and influence that comes with the post. 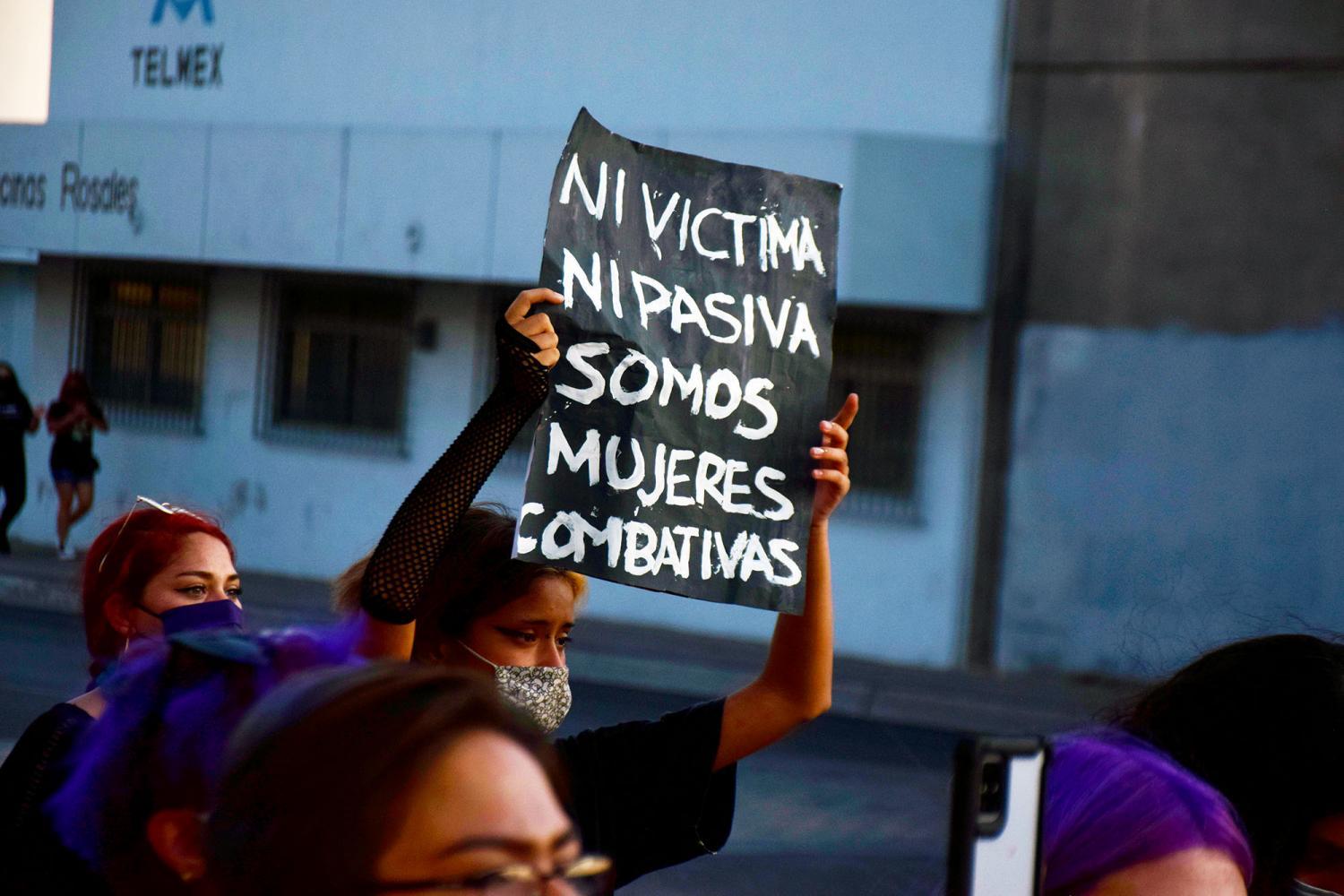 “It’s really a tremendous step forward,” she said, adding that it was possible because of a 2019 constitutional reform known as “parity in everything.” Pushed forward by women in Congress, the new law was implemented for the first time in this election and requires gender balance for all elected and appointed government positions.

Martinez says political parties did the bare minimum. Women were chosen to run in races the party was less likely to win, or that were considered less politically important. But they still won up and down the ballot. In addition to governor races, women gained a few more seats in Congress, where they have made up just less than 50% of both houses since 2018, and will now make up a majority in local legislatures in several states, including Sonora.

“There’s a long history, a long and varied history. We’re not talking about women’s political engagement as a monolithic thing,” said Sonia Hernandez, a history professor at Texas A&M University. “They have always had different lanes, different idea, different interests.”

Hernandez has researched and written about Mexican women’s political engagement dating back long before their gained suffrage in 1953, including their important roles in the Mexican Revolution. And like men, their party affiliations, goals and politics have always been diverse — some more favorable to women’s rights than others.

She and others emphasized that while women’s political participation can benefit other women — it doesn’t always. And it’s problematic and unfair to expect women to bear the full burden of fighting for gender equality in political spaces.

“That’s a lot. That’s a lot to ask,” said Hernandez. “It should fall on all elected officials to fight for gender equality. We should have that expectation just as much of men in office as women.”

So while she believes representation is important, she says it’s not enough.

“It has to go beyond the symbolic,” she said. “We need to celebrate, I mean, this is historic and we’ll be studying this election someday. But if there are no real reforms with real consequences and real sanctions, I think we can, for the next 20-30 years, have this conversation again and say, ‘Oh, another four women took governorships, or half of the country.’ But that’s not going to mean anything if there are no real consequences for gender violence.” 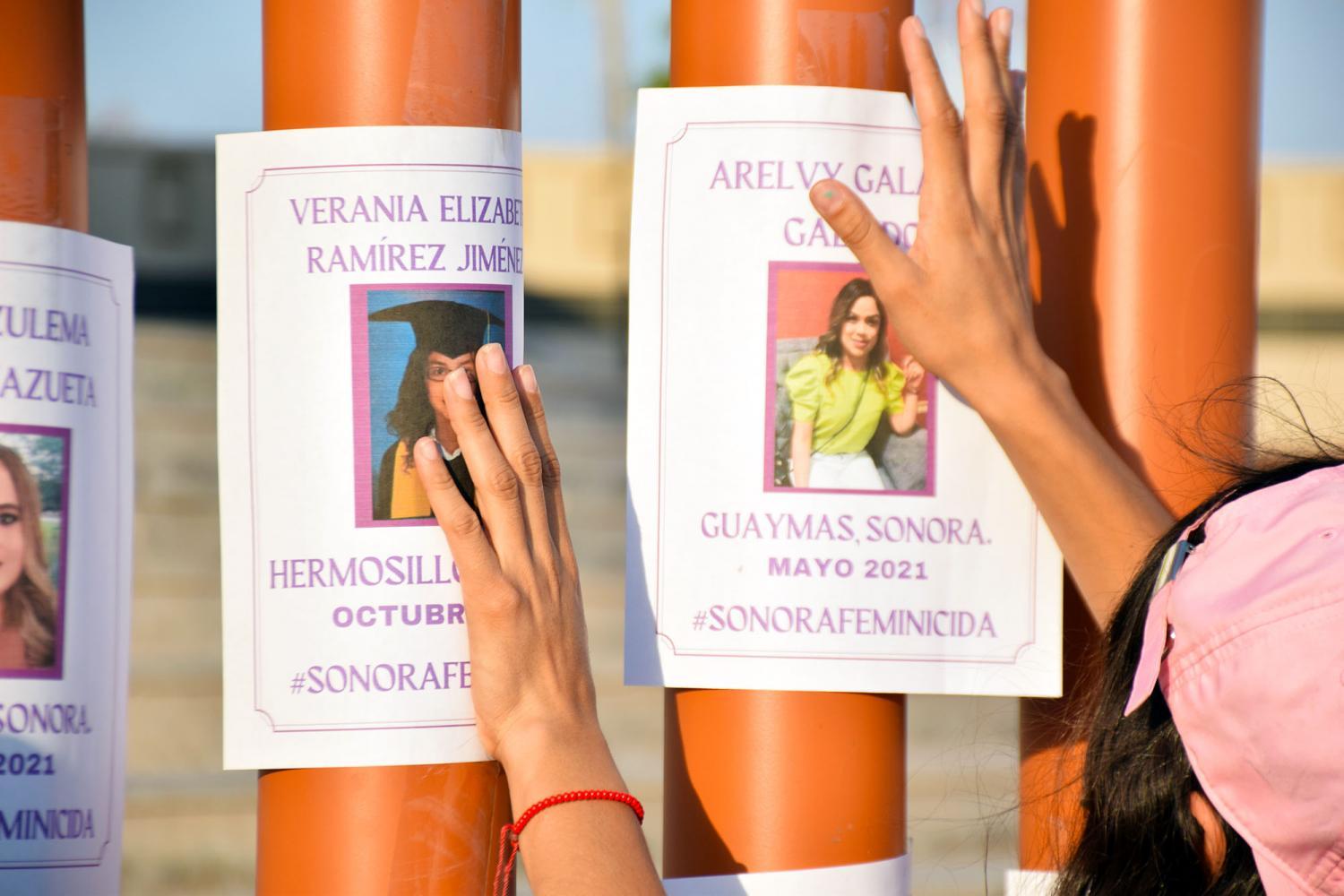 Kendal Blust/KJZZ
Protesters post photos of women who have been murdered or gone missing in Sonora during a protest on June 13, 2021.

Women At The Helm In Sonora

That’s an argument many feminist groups have made in neighboring Sonora.

Just a week after the election, a group of women chanted outside the governor’s palace in Hermosillo, where the state’s first female governor, Claudia Pavlovich, is wrapping up her six year term. The protesters pasted dozens of photos of women gone missing or murdered on the building’s bright white walls, then splattered them with red paint — calling attention to the unending barrage of gender violence in the state. 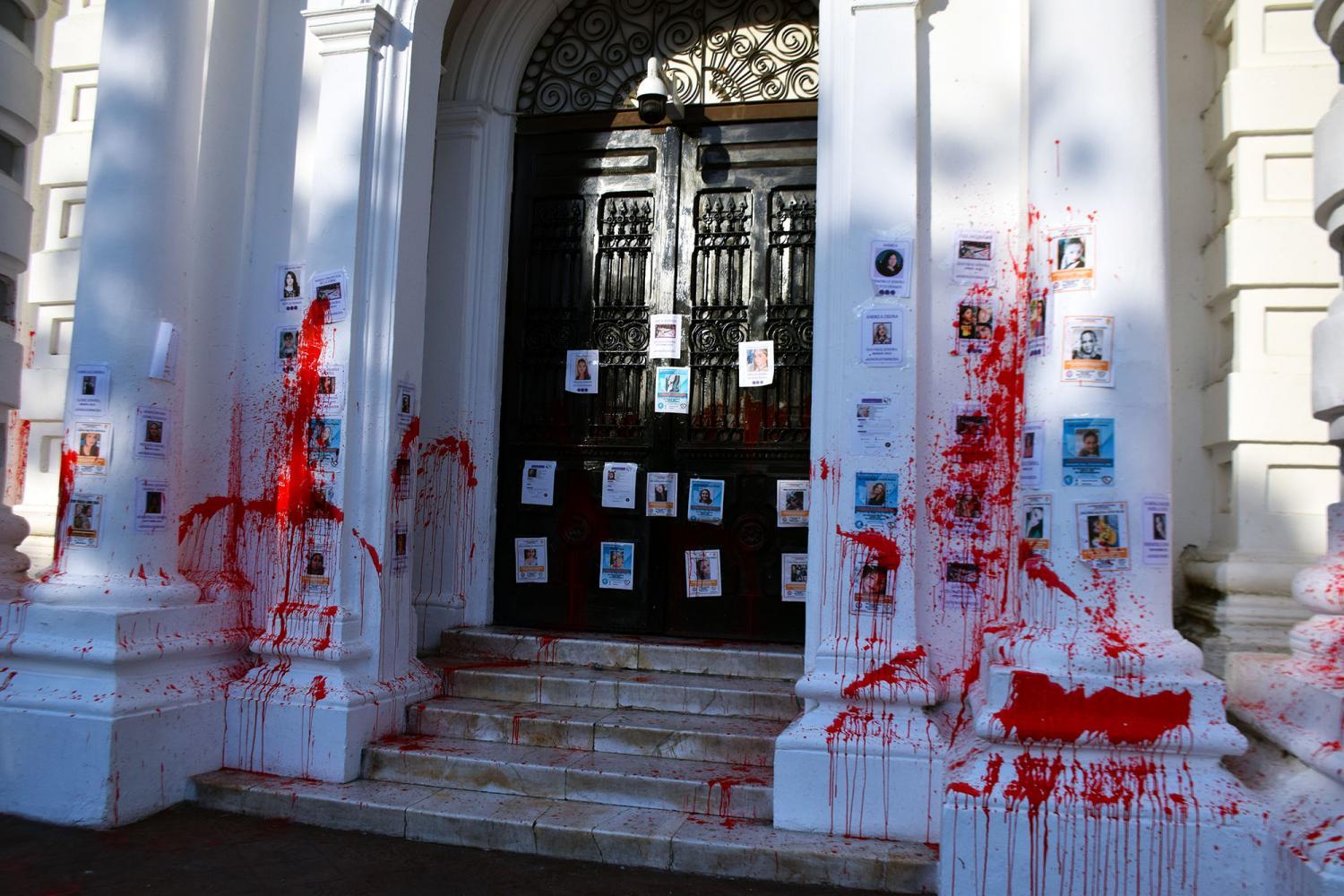 Kendal Blust/KJZZ
Women splashed red paint on the front of the governor's palace in Hermosillo, Sonora, to protest violence against women on June 13, 2021.

Silvia Nuñez, Sonora’s representative for the National Citizens Observatory on Femicide, said the state is a perfect example of the fact that having women in office doesn’t automatically equate to positive changes in women’s lives.

“Very palpably, we’ve already had the first woman governor and we didn’t see any difference as it relates to gender. On the contrary, the entire cabinet was made up of men, her policies continued to serve the dominant perspective,” Nuñez said. “If not we would not be seeing the levels of gender violence we’re experiencing now.

She believes violence is a clear example of Sonoran leaders’ failure to adequately represent women.

Over the past six years, nearly 500 women have been murdered in the state. Kidnappings, sexual abuse and domestic violence also remain high — as does impunity.

Nuñez said there’s also been a lack of support from leaders for women’s reproductive rights.

That was perhaps no more clearly evident than in a video that went viral earlier this year of Hermosillo Mayor Célida López calling women who support abortion “morons” and making fun of the green bandanas many pro-abortion activist wear.

There was a huge outcry, and her comments made national news. Lopez publicly apologized for her statements. But Nuñez said the video was just the most public version of the mayor’s positions on women’s issues.

López lost her bid for reelection. 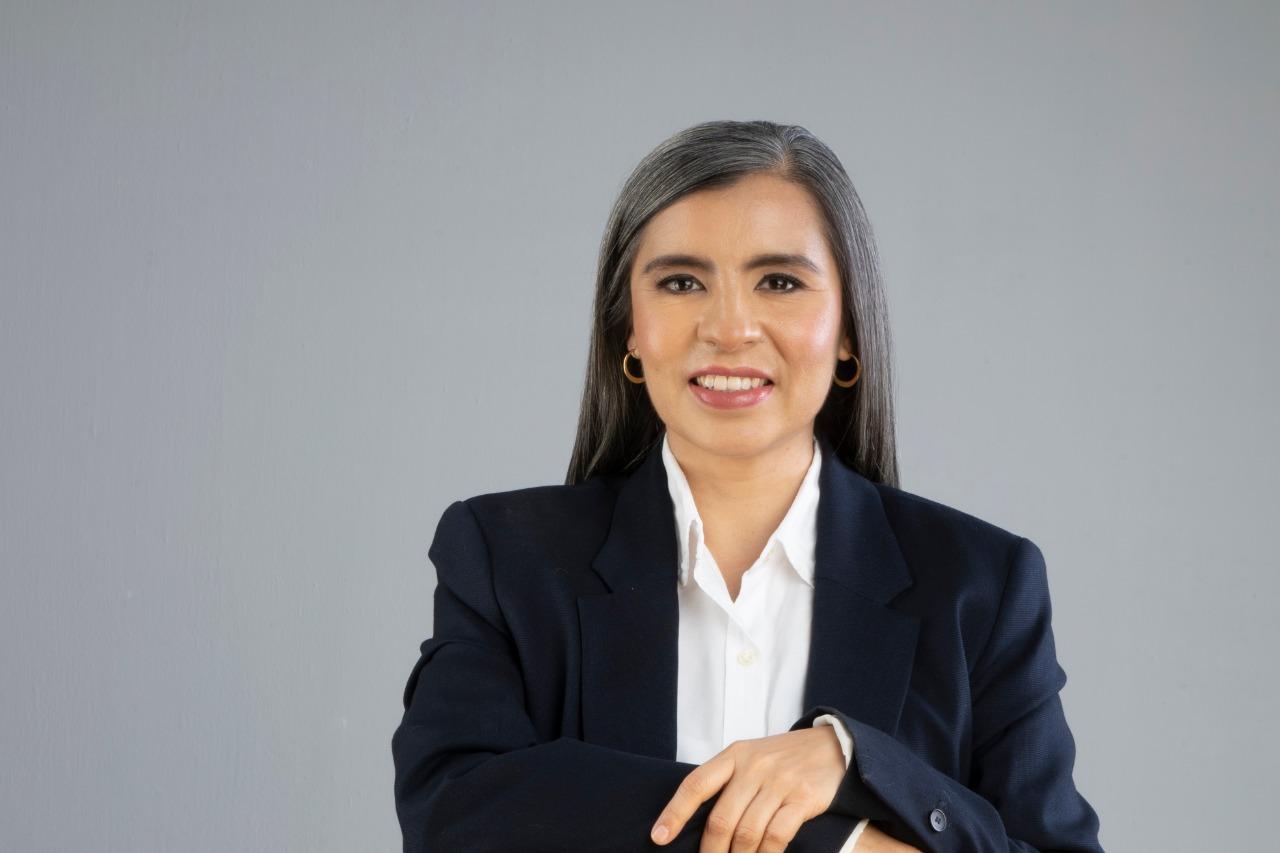 Marian Mendivil
Wendy Briceno is a Mexican congresswoman from the state of Sonora. She was reelected for a second three-year term on June 6, 2021.

But despite her disappointment in the administrations of some female politicians, Nuñez said she also strongly believe electing more women is imperative.

“It’s extremely important because I think we’re in a moment of transition. For now, the work is to get more women in office and to normalize their presence and their perspectives,” she said. “In years to come we’ll see women more able to push harder and to take stronger stands. But this is an important first step.”

And like others, she emphasized that all politicians should be expected to govern for all citizens, not just for men, as has historically been the case.

“We can highlight, obviously, Wendy Briceño, who has played an incredibly important role in the last three years,” she said. “She is emblematic of how politicians can serve the women they represent and use a gendered perspective, while still caring about issues that affect everyone.”

Briceño was re-elected on June 6 to a second three-year term in Mexico’s lower house of Congress, where she heads the body’s Gender Equality Commission and helped pass a slew of laws serving the rights of women, including “paridad en todo,” or parity in everything — the new election equality law.

In fact, Briceño said, she believes the only way to create a true democracy is to reach parity, because a country where there are not equal numbers of men and women in positions of power can’t truly represent all citizens.

The challenge now, she said, is removing barriers that prevent them from getting into office. Chief among them, rampant political violence in the country that for women includes not only kidnappings, assaults and murders, but attacks online and in the media.

Briceño herself faced attacks this year during the campaign, and won a case against her aggressor using new penalties against political gender violence she helped get passed.

“Politics can be exhausting, and there is no reason why it should be doubly exhausting for women, which it is right now for a lot of reasons,” she said.

Despite the challenges, she said, she hopes women keep showing up and fighting for their place at the table.

“I would make a call to other women, in Mexico and other places, around the world — we have to participate in politics. We have to bring new perspectives to politics. And always thinking on behalf of women and the rights of girls.” 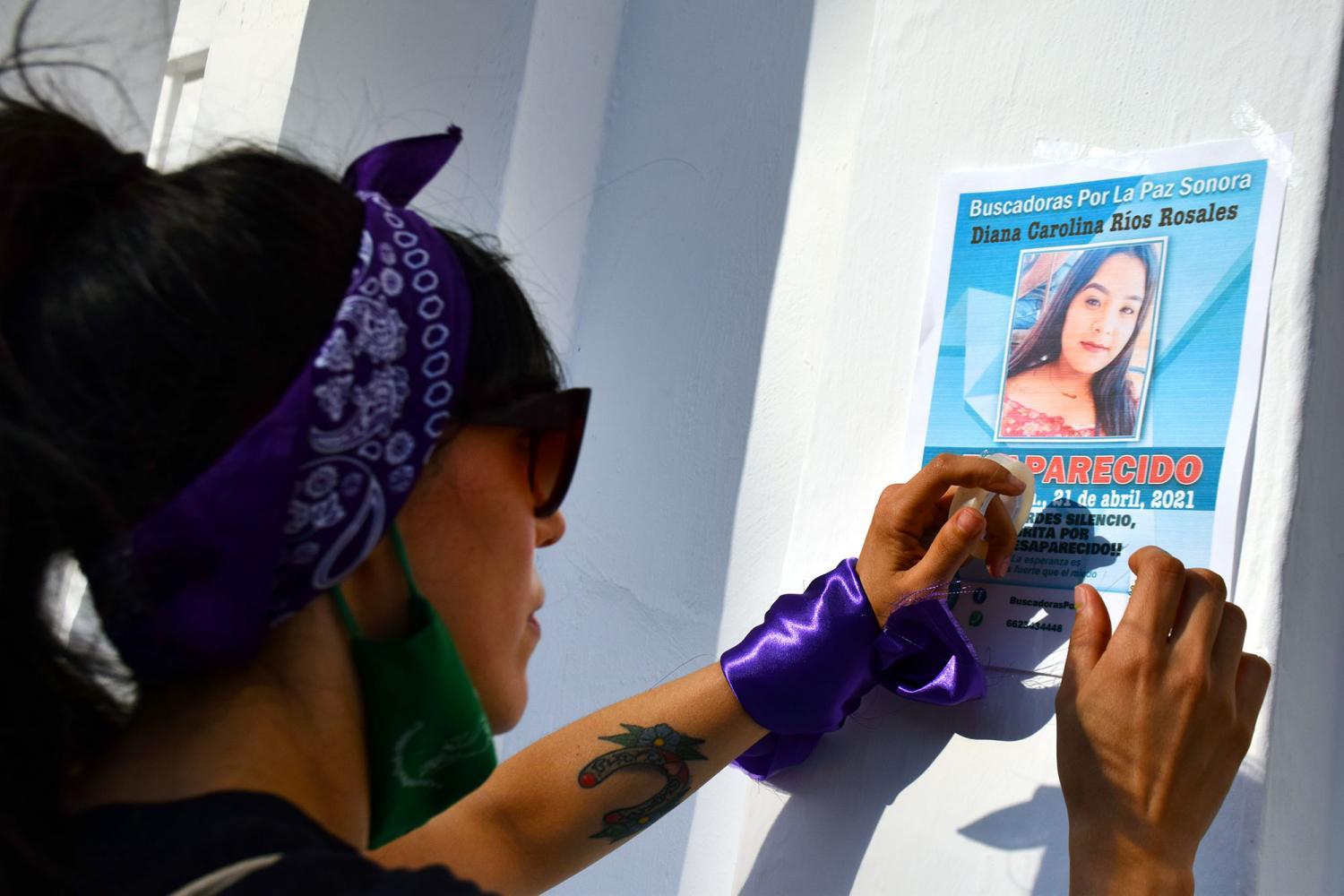 Kendal Blust/KJZZ
A protester tapes a photograph of a missing women to the governor's palace in Hermosillo, Sonora, on June 13, 2021.
PoliticsFronteras Sonora