Arizona's GOP lawmakers want to spend $700M on 17 miles of border wall. But is it possible? 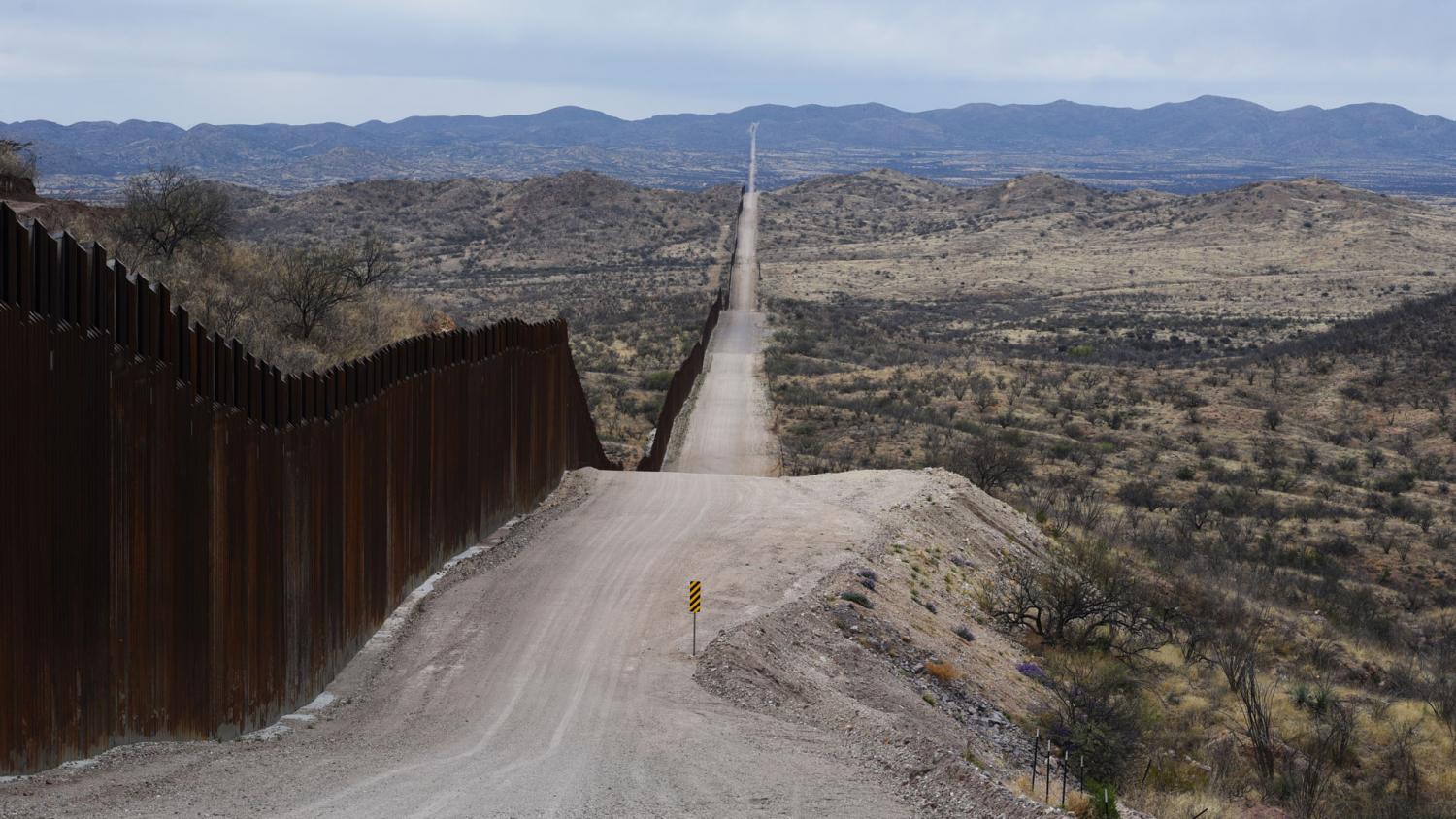 Alisa Reznick/KJZZ
The newly-built border wall and access road snake up and down mountainous terrain near the remote Sasabe Port of Entry.

At the Sasabe Port of Entry — a remote border crossing southwest of Tucson — rolling hills are dotted with mesquite trees and spindly shoots of ocotillo. The landscape runs seamlessly into Mexico, except for the parts blocked by the Trump administration’s 30-foot steel bollard border wall.

Myles Traphagan is the borderlands program coordinator with the conservation group Wildlands Network. This is one of the places where border wall construction carried out under former President Donald Trump, abruptly ends. On the last bollard panel, Traphagen can barely make out the letters and numbers carved into the rusting metal. 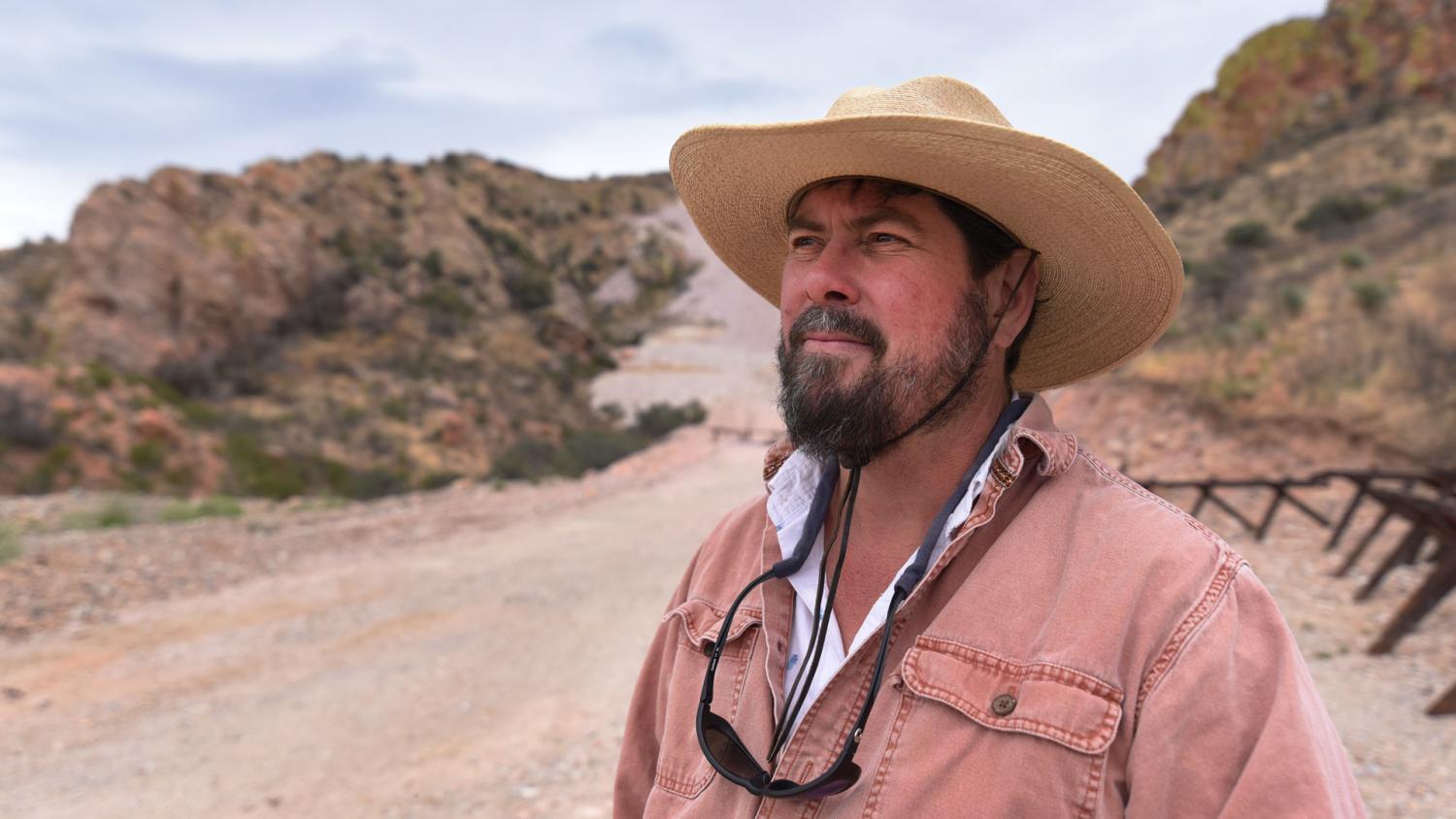 Alisa Reznick/KJZZ
Myles Traphagen, a researcher with the conservation group Wildlands Network, has spent the last few years mapping the changes in Sasabe and other parts of the border in Arizona and other border states.

By then, his predecessor had already built some 450 miles of the steel bollard barrier along the southern border. More than half those miles are in Arizona. Traphagen studies how wildlife moves and lives in the Sonoran Desert. He’s spent the last few years mapping how construction was changing the landscape and the animals that rely on it. He spent a lot of days on the border, as construction crews used dynamite and heavy machinery in places like Sasabe to carve up the tough terrain.

“That marked the day that things stopped, that the bleeding stopped,” he said.

For Republican lawmakers in Arizona, the date was no cause for celebration, but it did present a political opportunity.

Arizona politicians have spent much of Biden’s presidency bemoaning what they call a “crisis” at the southern border.

Gov. Doug Ducey has used every opportunity to attack the Biden administration’s border policies. At a recent press conference, Ducey turned a question about the Centers for Disease Control and Prevention's announced ending of pandemic-era asylum restrictions at the border into a campaign talking point. 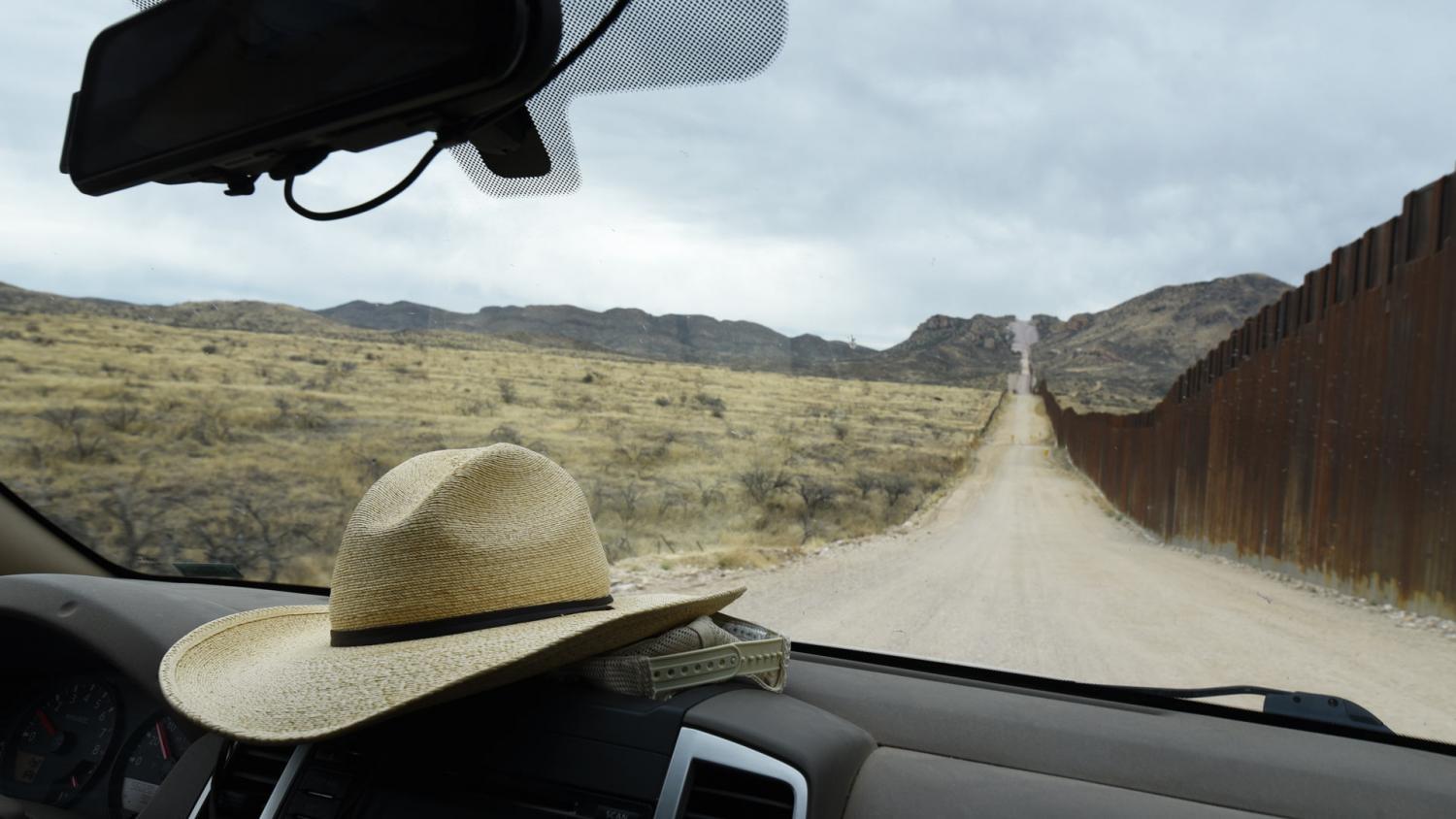 Alisa Reznick/KJZZ
The border wall built by the Trump administration covers around 20 miles of wilderness around the Sasabe port.

“[Democrats are] gonna pay a hell of a price at the ballot box in November,” Ducey boasted.

At the state Capitol, Republicans used the legislative process to contrast their own border views with that of Biden’s. Sen. Wendy Rogers, a northern Arizona Republican who’s one of Trump’s fiercest defenders, sponsored Senate Bill 1032 to fund $700 million in projects along the border — enough to build roughly 17 miles of the wall, she estimated.

“This is our chance to protect ourselves, because we aren’t having this built by the federal government,” she told senators during a committee hearing in February.

But even as Republican senators unanimously voted for SB 1032, it was clear the bill was more performance than substance.

Every legislative session, any bill to spend public money is swept up in a larger debate about the state’s annual budget. Sen. Tyler Pace, R-Mesa, acknowledged as much from the Senate floor, and denounced the idea of spending so much public money on the border — and voted SB 1032 anyway.

“I cannot and will not support a budget that comes out of here that appropriates this entire amount of money to this project,” Pace said. “I think that that would be a misuse of our state funds if we were to spend this amount. But for the conversation, that it needs to be going there, I'll vote aye today.” 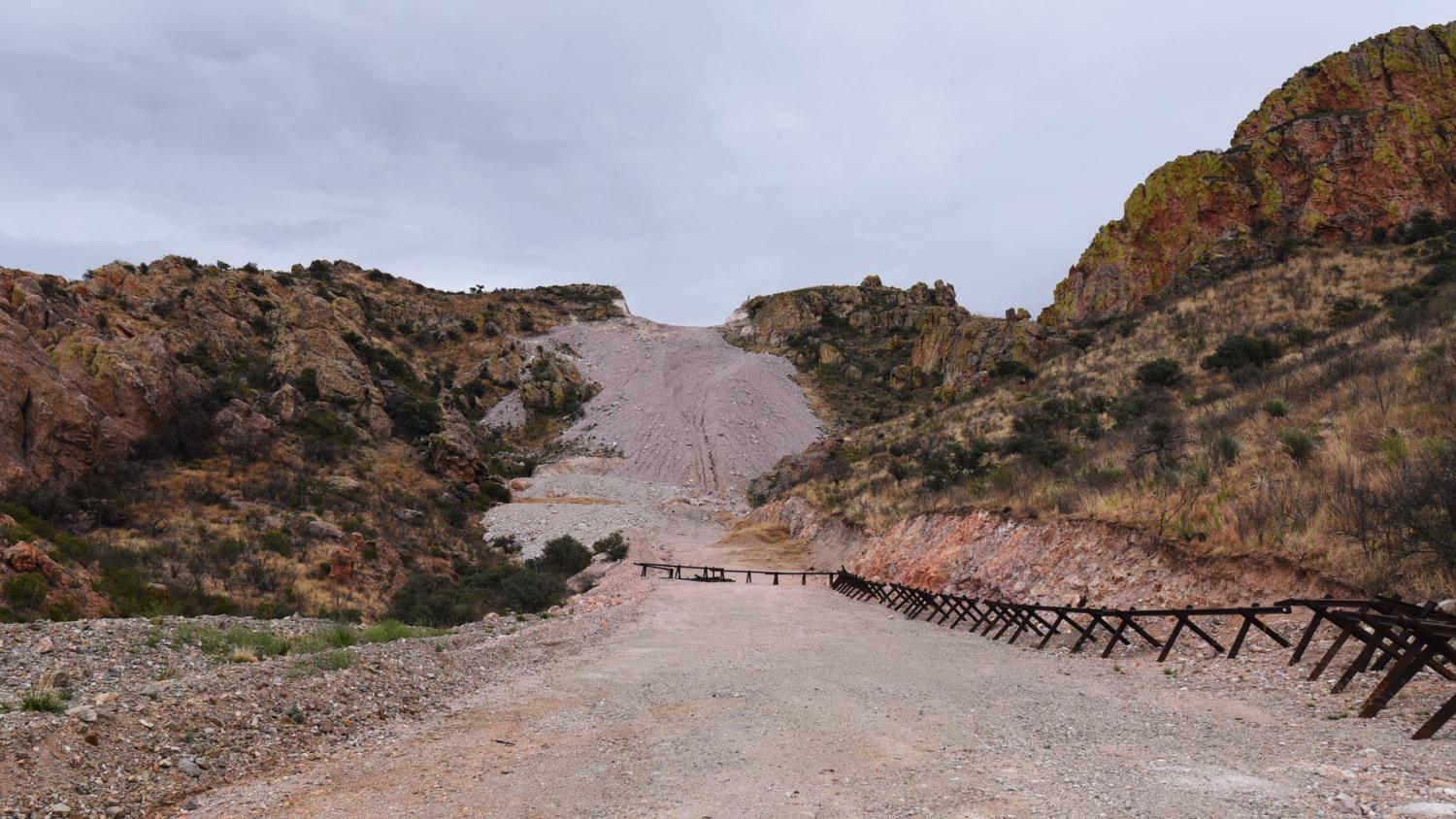 Alisa Reznick/KJZZ
Construction crews used dynamite and heavy machinery to attempt to built a portion of border wall through the Cerro del Fresnal, a famed mountain peak along the border in Sasabe.

SB 1032 never got a hearing in the House of Representatives. Speaker Rusty Bowers (R-Mesa) didn’t even bother assigning the bill to a committee — a likely nod to the reality that spending $700 million is a conversation better suited for budget negotiations.

“They don't really care if it works or not,” Coughlin said. “It's red meat, on the grill, for them to consume and then to be self-validated that this senator or this representative is doing something for their cause.”

Regardless of whether $700 million is ever spent on the border, Republican senators can now return to their districts and boast of voting for a massive infusion of cash to “build the wall.” And in most districts, it's a safe bet their boast will play well with the voters that matter.

Most of Arizona’s legislative districts lean heavily Republican or heavily Democratic, meaning lawmakers don’t have to bother making appeals to independents or voters across the aisle, Coughlin said. 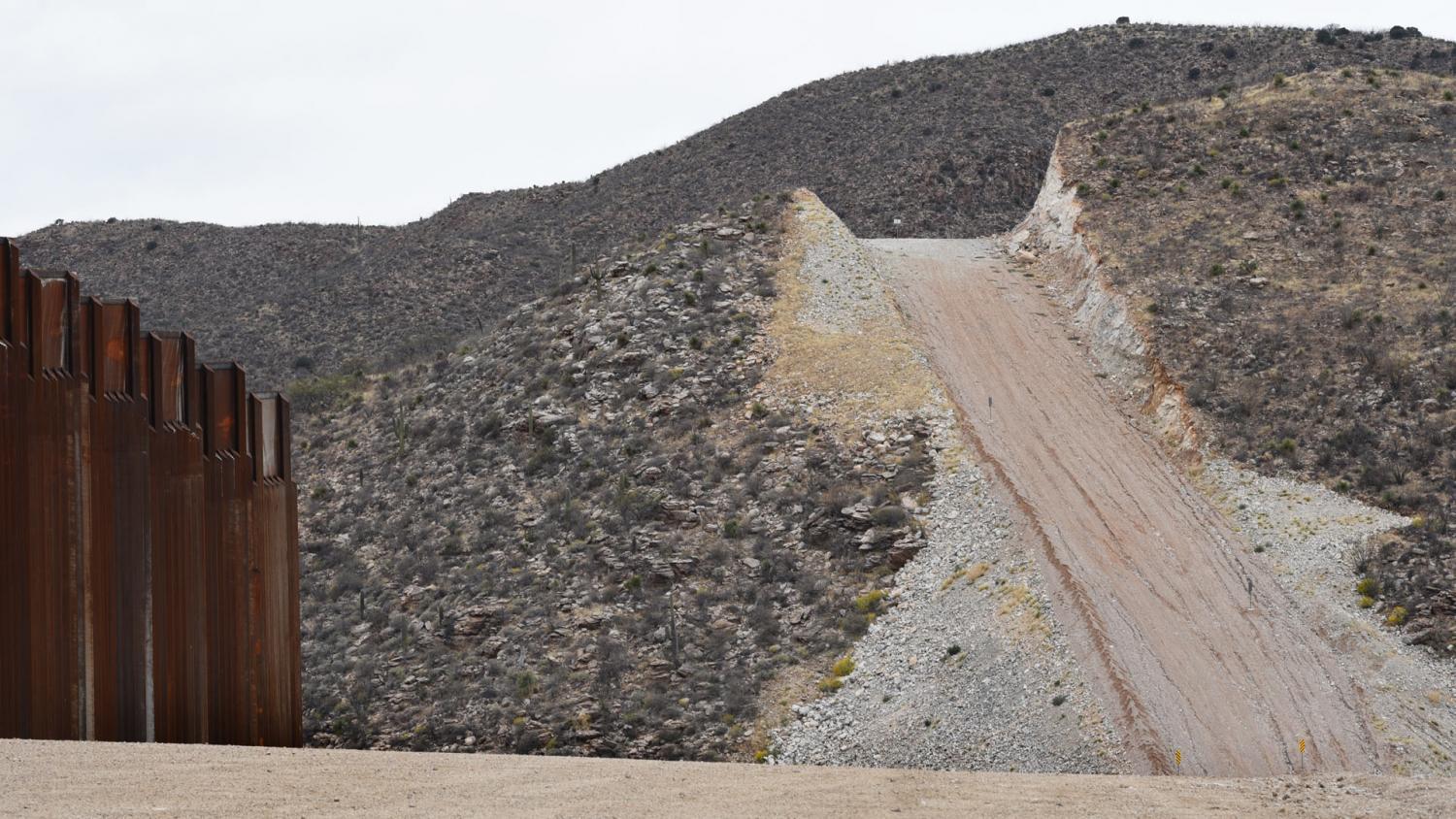 Alisa Reznick/KJZZ
A portion of the wall built by the Trump administration ends a few miles west of the port. Contractors also built an access road that goes further.

And while SB 1032 is stuck, the idea of building the wall is alive and well as long as Republican politicians know that immigration, and therefore border security, is a top issue for their base this election cycle.

If not $700 million, Ducey already set the base for investing in border construction at $50 million — the amount reserved for “prison-style” fencing in his executive budget proposal. The governor’s office told reporters that fencing would be built on private land, with permission from landowners.

But even the governor’s plan doesn’t reflect the realities on the ground. Arizona’s border is a hodge-podge of state, federal, tribal and private land – most of it is federally-protected or tribal. The state isn’t allowed to build there. There’s a lot about the actual border that many people may not know, or don’t care to find out. 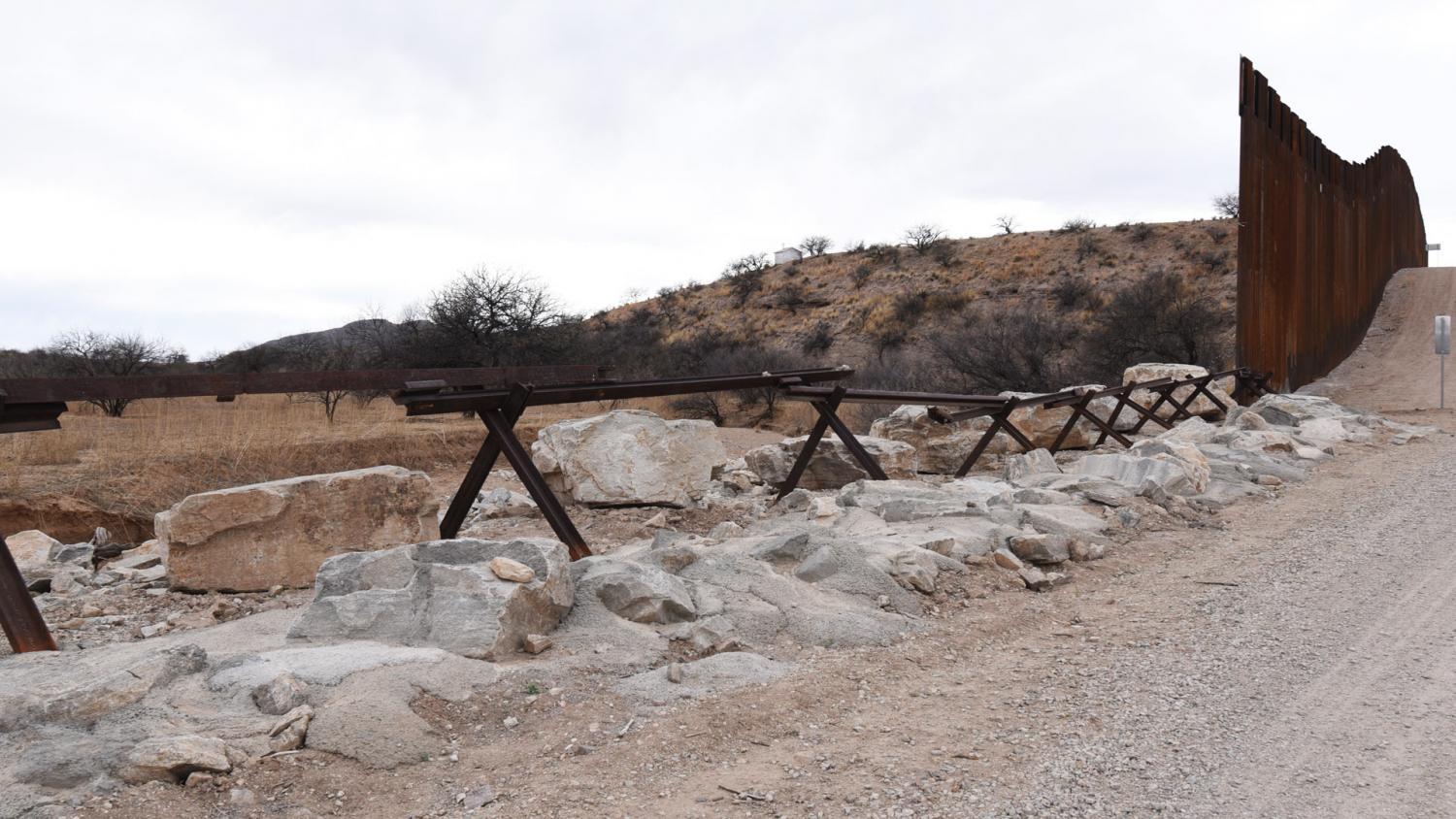 Alisa Reznick/KJZZ
Traphagen has counted 25 gaps in the border wall, like this one, around the Sasabe port, often left open as a result of an engineering error or because it was a cross-border wash. DHS plans to close gaps up to 100 feet in width.

“The farther one gets from the border, the stronger their opinion seems to become,” he said.

The Department of Homeland Security has plans to fix problems with the existing wall, as left behind by the Trump administration — projects for erosion control, and filling in small construction gaps.

Meanwhile, researchers like Traphagen are still trying to assess the impact dynamite and construction has had on a biodiversity goldmine.

He and other advocates and southern Arizona landowners are in talks with DHS about how remediation will look. Initial projects are expected to begin in a few months.

Traphagen says they, too, want money budgeted for the border — just not for more walls.

As for wildlife with habitat on both sides of the border, he believes much of the damage can’t be undone.

“If these crucial places that are often rare and somewhat small on a regional scale … are not allowed to function as they always have — essentially what we’re doing here is an uncontrolled experiment that affects the evolutionary history of North America,” he said.

EDITOR'S NOTE: This story has been updated to correct the spelling of Gov. Doug Ducey's name.