Years after he was last seen in Arizona, famed jaguar El Jefe has been spotted in Sonora 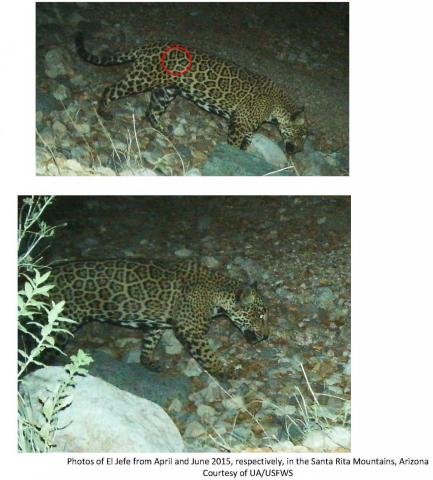 A rare northern jaguar last documented in Arizona in 2015 has been spotted on camera in neighboring Sonora. Conservation groups point to the sighting as evidence of continued cross-border connectivity for the species.

The famed adult male jaguar, nicknamed El Jefe, was photographed multiple times in Arizona’s Santa Rita Mountains from 2011 to 2015. But it had been nearly seven years by the time he was caught on camera again last November in central Sonora by the Mexican nonprofit PROFAUNA.

“It was like a surprise, it was excitement,” said Carmina Gutierrez, research coordinator for the Tucson-based Northern Jaguar Project at their jaguar reserve in Sonora.

Gutierrez was able to identify El Jefe by comparing the new photos taken in 2021 with a database of jaguar photos captured in the U.S.-Mexico border region.

She said the match is definitive. And El Jefe, now at least 12 years old, is the third-oldest jaguar to have been documented in Sonora.

“There’s a connection, an emotional connection, that people built with El Jefe as he was roaming the Santa Ritas and people, especially in Tucson were following his every step and eager to know how he was doing,” said Juan Carlos Bravo, director of conservation programs with the nonprofit Wildlands Network.

All of that was left in limbo when he went missing from cameras, he said. “So it’s exciting to see him alive and well.”

While it’s unclear when or where El Jefe crossed the border, his presence in Sonora is a positive sign for jaguars more broadly.

“It means that we have connectivity and we have the exchange of genetic information,” Gutierrez said.

Despite barriers like the border wall, jaguars are still moving between Arizona and Sonora. That connectivity is essential to protecting the species and for any hope that the animals could someday re-inhabit their historic range in the United States. 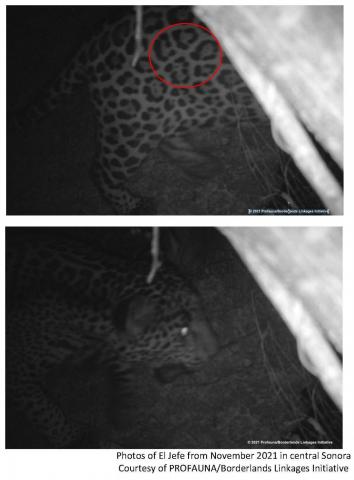 The photo taken of El Jefe in 2021 was part of a binational collaboration between eight organizations called the Borderlands Linkages Initiative, which has 150 motion sensitive cameras in Sonora to track the movement of jaguars and other wildlife.

Gutierrez said without that kind of coordination it would have been impossible to identify El Jefe as the same jaguar that had been seen so many years ago in Arizona.

And Bravo said the excitement around El Jefe’s reappearance is a good time to remind people on both sides of the border how critical it is to protect wildlands and the corridors animals like jaguars need in order to continue crossing the border and thriving in this region.

“We have to start thinking about this landscape as a shared landscape; our issues as shared issues; our problems as shared problems and our solutions as shared solutions,” he said. “We have to come together and be creative about how to protect jaguars in Sonora, how to make sure the corridors remain open into Arizona, and eventually how we are going to make sure jaguars can return to Arizona and establish a breeding population north of the border.”