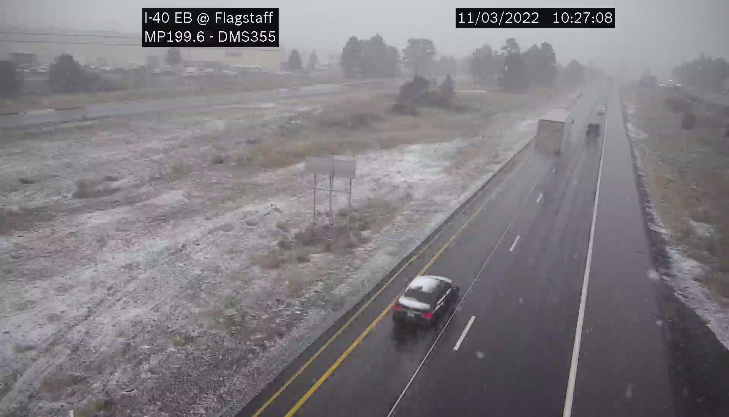 Arizona Department of Transportation
Snow on the I-40 near Flagstaff on Nov. 3, 2022.

Northern Arizona faced a passing storm bringing snow and cold weather last week. Meteorologist Justin Johndrow from the National Weather Service based in Flagstaff said the effects of the storm had varying impacts across the region.

“Parts of the eastern Mogollon Rim over into the White Mountains got some of the higher amounts that we saw. Pinetop-Lakeside, we got one report at five and a half inches of snow over there. That was one of the higher reports that we’d gotten,” he said.

Areas that received less inches of snow are Forest Lakes, Pine and Flagstaff.

The National Weather Service says much of northern Arizona enjoyed warmer weather over the weekend, but another storm coming Wednesday could bring gusty winds, snow and difficult driving conditions.

As we're enjoying the fair weather this weekend, let's take a peek at the next storm (due on Wed). Greatest risk of snow impacts will be over NW Arizona...but, it's still several days away, and the forecast will be evolving with time. Stay tuned for updates! #azwx pic.twitter.com/SuzEMMu4La