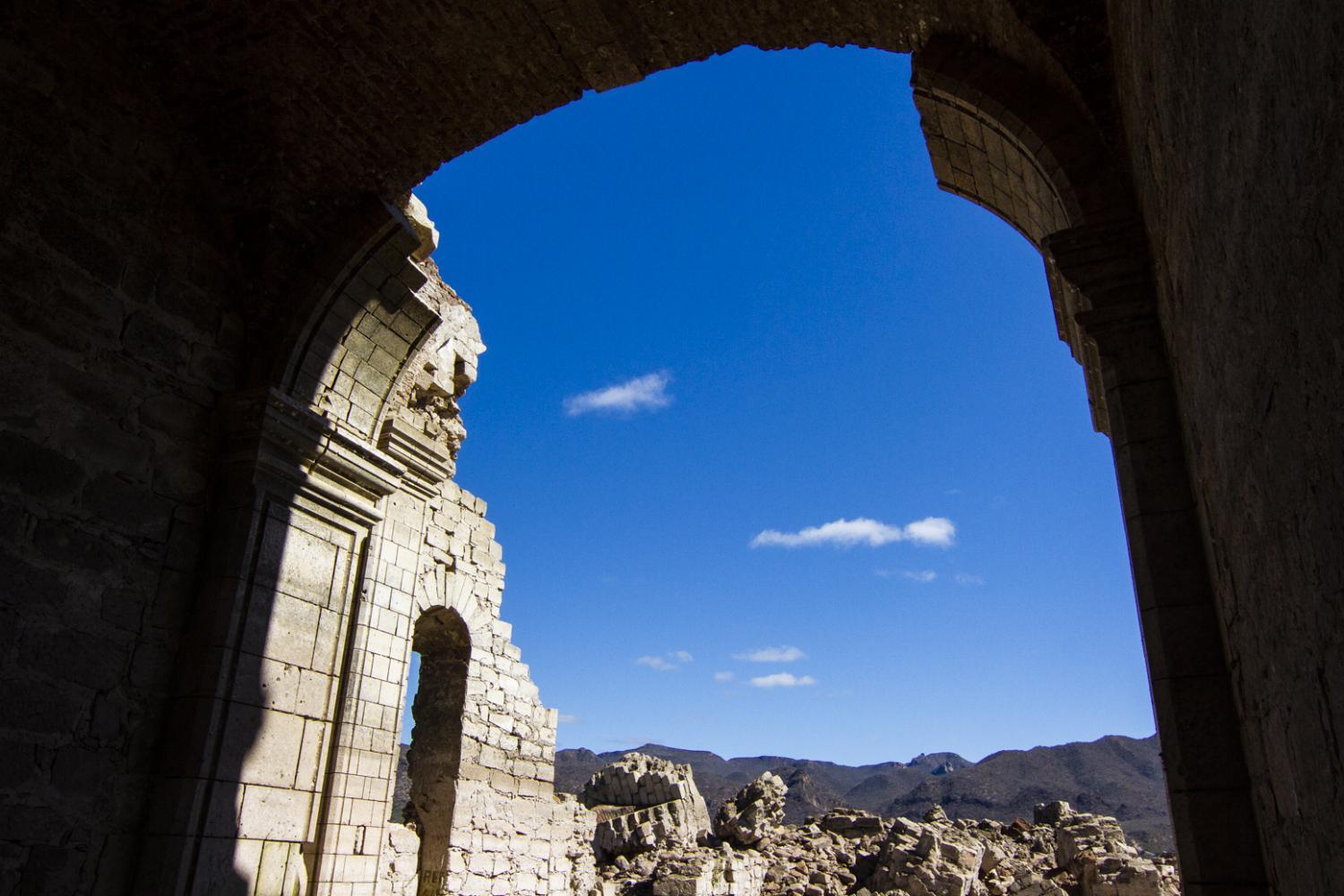 Murphy Woodhouse/KJZZ
Many parts of the nearly three-century-old church in Batuc, Sonora, have collapsed.

The San Francisco Javier de Batuc Church spends much of the year mostly submerged in the waters of the El Novillo reservoir in rural, central Sonora.

In February, though, the nearly three-century-old ruins stood above the water line, an impressive sight from the pontoon I was on.

“Here we are, on the edge of the what was the old town of Batuc,” Ramon Ruval said as the boat approached the shore. “You can only see the ruins, and the only thing that remains is the church, the graveyard and the part of the town plaza built of concrete.”

Ruval, a resident of nearby San Pedro de la Cueva, said his great-grandfather — along with a number of other Batuc residents — is still buried there.

We got off the boat and walked to the church, where I followed him up the steps to the second-story choir. And then — very slowly, very carefully — up the crumbling, exposed staircase to the never-finished tower overlooking the town.

“You can see the foundations where the houses were, the streets are still laid out,” he said from the high perch. “Out there in the distance, we can see the graveyard.”

The Price of Progress

Batuc was just one of three towns wiped away by the Plutarco Elias Calles — or El Novillo Dam. The remnants of Tepupa and Suaqui are also nearby. All three were originally founded in the early 1600s by Jesuit missionaries on lands long occupied by the Opata and other indigenous peoples.

From 1958 to 1964, Mexico’s energy utility oversaw construction of the project, which was part of a national effort to transition from an agricultural economy to industrial modernity. In the government’s view, the displacement was that transition’s hard but necessary price. Ruval and other former residents and their descendants share that view. Others are less certain.

“When you really talk to those impacted, you realize how difficult that stage of the displacement was,” said Suzette Celaya, author of a book on the event. “And how the government was insensitive — I don’t know if the word is insensitive. They simply did not properly handle this very difficult task, of moving 3,000 inhabitants.” 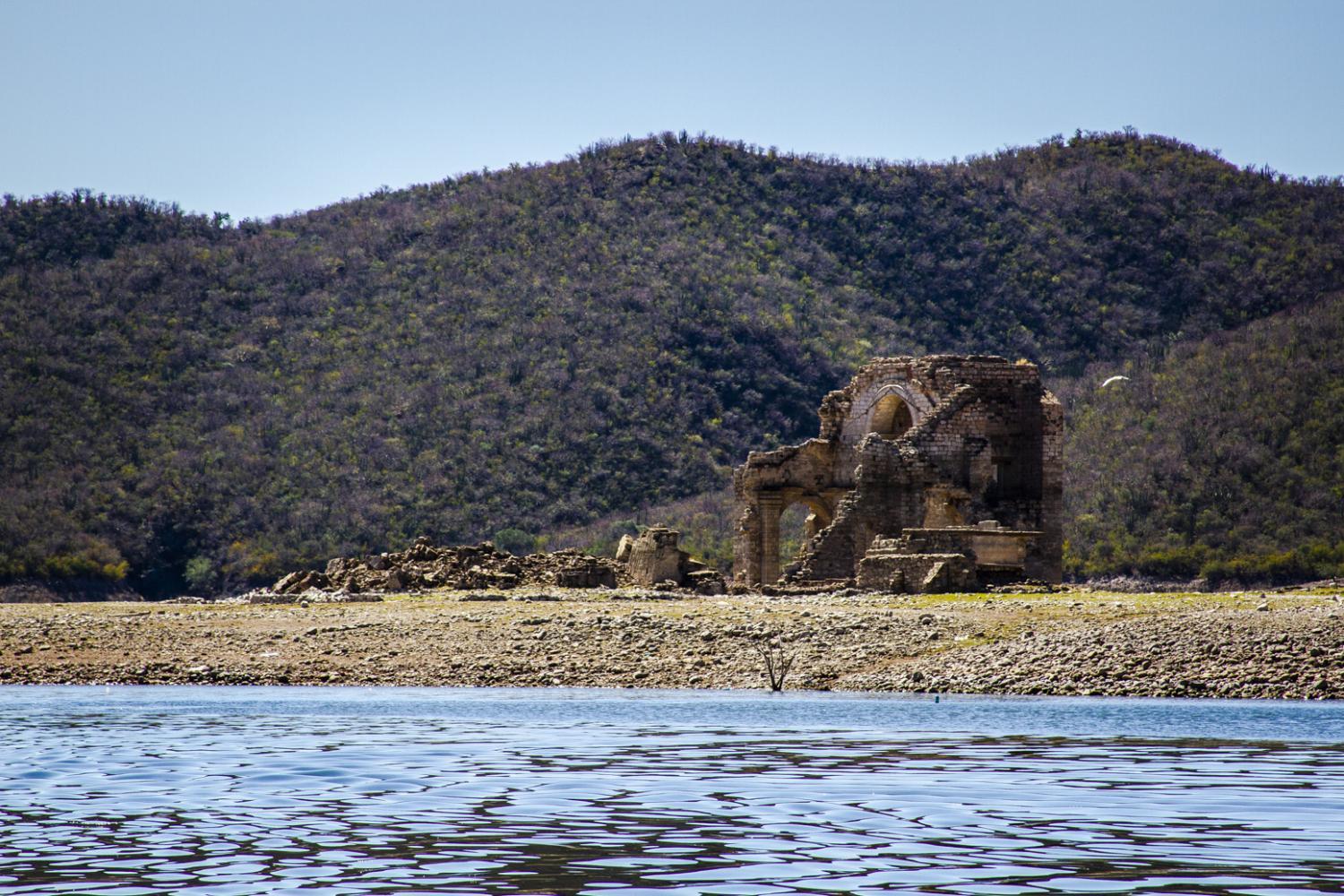 Murphy Woodhouse/KJZZ
Once the monsoon rains return, the San Francisco Javier de Batuc Church will again sink below the waterline.

Large landowners and other wealthy residents came out pretty well under the compensation plan. Many others received very little — or nothing at all — to restart their lives in unfamiliar places, according to Celaya.

“Those who didn’t have a house or land, they didn’t give them anything,” said Graciano Encinas Núñez, an 80-year-old former resident of Batuc who now lives in San Pedro. “I was one of those.”

“It broke the social productive dynamic of the places,” Celaya, now a doctoral student at the Colegio de Sonora, said of the blunt displacement and compensation strategies.

As the waters arrived, it sometimes devolved into an all-against-all situation. Decades later, Encinas Núñez still feels that the benefits outweighed the costs, pointing to the energy generation and fishing industry that blossomed in San Pedro. But he thinks it’s important to remember those costs, and who bore them.

“They’re sacrifices of the people, those of us who lived there,” he said. “Sacrifices for progress.”

At the north end of the reservoir in San Pedro, young artists have turned a 100-foot-long, 6-foot-high wall into a vibrant memorial of the three towns.

You can see the church in its original glory, as well as forlorn families hauling their worldly possessions away from rising waters.

“It’s a part of our town,” said 17-year-old Rebecca Garcia Figueroa of the history depicted in the mural. Her grandparents were among those displaced in Batuc, and she thinks it’s a good way to make sure that history isn’t lost or forgotten. 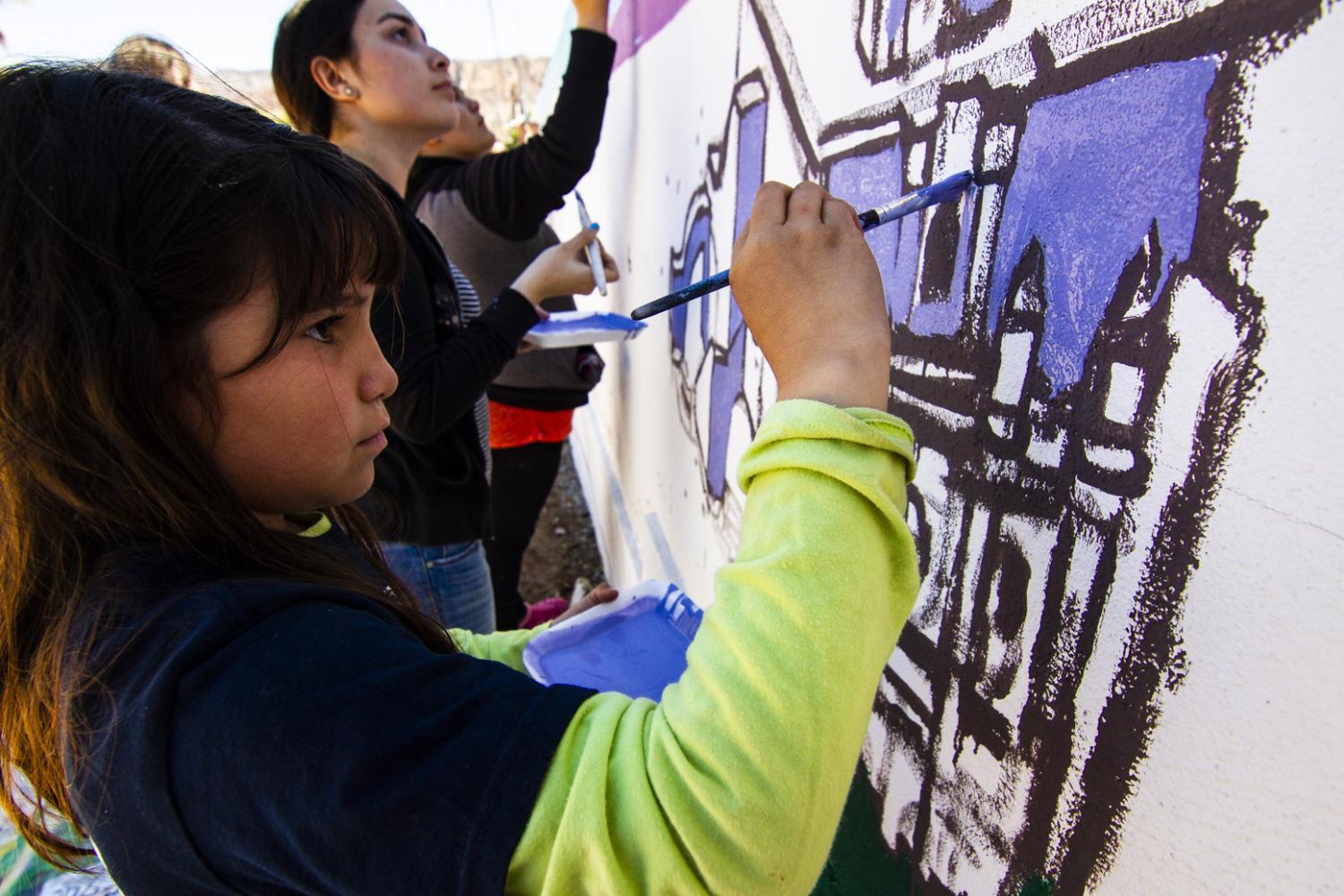 Some of her peers weren’t as well-versed in the history, and that’s exactly the point of the project, according to organizer Maria Tarazon, whose father was also displaced.

“This project is very important. There are young people here that perhaps don’t know the whole story,” she said. But there are also adult residents, as well as tourists, who could also learn a lot.

Not All Was Lost

Perhaps the most impressive historical preservation effort was the rescuing of the Batuc church’s facade. Before the flood waters arrived, it was carefully disassembled piece by piece, and then reconstructed at the Plaza de los Tres Pueblos park in Hermosillo.

The ambitious effort was spearheaded by prominent Hermosillo architect Gustavo Aguilar Beltran, who died in March two months shy of his 101st birthday.

I met up at the park with Juan Encinas Blanco, who was involved in the effort when he was a young engineering student at the University of Sonora in the 1960s. 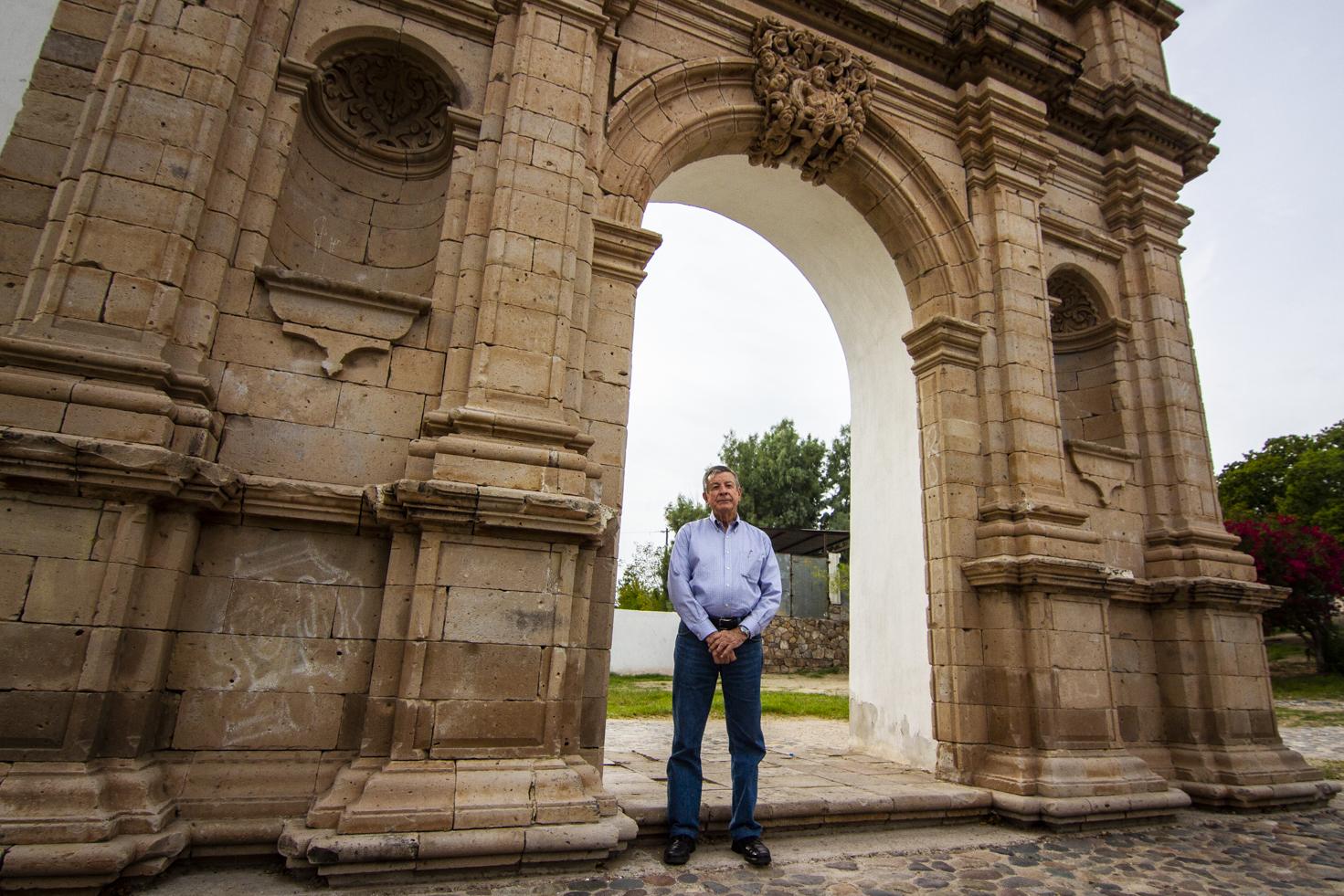 Murphy Woodhouse/KJZZ
Juan Encinas Blanco stands under the archway of the San Francisco Javier de Batuc Church's facade. In the 1960s, it was disassembled before the flood waters arrived, and rebuilt at the Plaza de Tres Pueblos Park in Hermosillo.

“The church in Batuc was very special, because the churches in other Sonoran towns were made of adobe walls, and wood roofs,” he said. “This was the only one that was made of rock, of quarried stone.”

Most work was done between 1744 and 1767, under the direction of Jesuit Father Alejandro Rapicani, according to Encinas.

“Many historians consider it to be the best built, and most beautiful” of Sonora’s missionary-era churches, he said.

Encinas, who was born in Batuc, hopes more can be done to protect the church that remains behind. Some people make off with pieces of the church, and vandalism has been an issue, he said.

“These towns existed, their people lived there for three centuries, almost four centuries since their founding,” he said. “Their history cannot be forgotten.”

Several hundred yards from the ruins of the church, back in old Batuc, Ruval and I were searching among headstones for his family name.

“My great-grandfather is in one of these,” he said. “But I don’t remember which one.”

Adding to the challenge was the thin film covering the headstones after years underwater. Some information was still legible.

“Dolores Lopez, died ...,” Ruval read from one headstone, but he couldn’t make out the date.

He said he’d need to take a wire brush to the headstones to make headway, but that would have to wait for another day. We gave up, and headed back to the waiting boat.