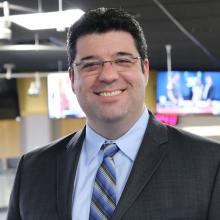 Nicholas Gerbis joined the Arizona Science Desk in August 2016. A freelance science journalist and editor for most of his career, he also has an extensive background in nonprofit and science communications.

In his spare time, he enjoys bad films, good documentaries and collecting old board games.

Gerbis briefly “retired in reverse” and moved from Arizona to Wisconsin, where he taught science history and science-fiction film courses at University of Wisconsin-Eau Claire. He is glad to be back in the Valley and reports that he has almost completely thawed out.