Mexico Is On the Brink Of Transforming Its Justice System

Mexico Is On the Brink Of Transforming Its Justice System 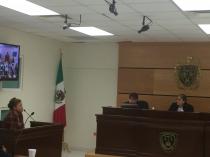 Mónica Ortiz Uribe
Nationwide, Mexico is adopting U.S.-style courtrooms like this one in Ciudad Juárez. 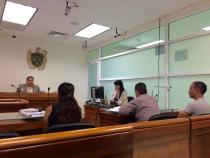 Mónica Ortiz Uribe
States across Mexico have constructed new courtrooms, like this one in Ciudad Juárez, to accommodate oral trials that are open to the public.

Mexico is on the brink of completing a major transformation of its judicial system. This June will cap an eight-year effort to switch from a closed system of mostly written proceedings to one that opens up trials to the public. Its goal is undoubtedly ambitious — to combat the country’s long history of impunity.

In Mexico's old criminal justice system it was common practice to invent facts and record them as the official truth. Attorney Roberto Hernandez described how he saw it firsthand back in 2001 while doing research in Mexico City's district courts.

"I'm looking at the computer screen where they're recording the answers of the defendant and there would be pre-filled questions and answers,” he said. “One of them was, 'Do you have a complaint about how the police treated you?' and it was pre-answered 'No.'"

Other common practices included confessions forced by torture and criminals bribing police to avoid arrest. In court, suspects were regularly questioned without a defense attorney. A judge could convict someone without ever meeting that person face-to-face. Hernandez was so shocked by what he saw, he decided to put it on camera.

He filmed a documentary called "Presunto Culpable" or "Presumed Guilty," released in 2010. It was about a man wrongly convicted of murder. The film won an Emmy and became the highest grossing documentary ever in Mexico. At one point it was even banned by the Mexican government.

"We had a system with a high probability of declaring guilt to innocent people," said the movie’s co-producer, Layda Negrete. "At the same time we also had a system that was incapable of bringing the real criminals to justice."

As a result, Mexico has one of the highest levels of impunity in the world — 98 percent of crimes go unsolved. In 2008 Mexico’s congress passed a constitutional amendment that mandated a nationwide overhaul of its court system. It set a deadline of June 18, 2016.

"It's a watershed moment,” said David Shirk, an American academic who studies judicial reform in Mexico. "It's an opportunity to make an incredible change that will have long-term implications in the administration of justice in Mexico."

One of the principal features of the new judicial system is that it introduces an adversarial style of litigation where the prosecution and defense debate as equals. Prior to the reform the defense had little to no access to the state’s investigation. Now the burden of proof falls on the prosecution, and people accused of a crime are entitled to a presumption of innocence until proven guilty.

One of the early adopters of the new system was the northern border state of Chihuahua.

At a recent hearing in Ciudad Juárez, a judge struck his gavel and ruled to formally charge two young men with murder. The entire hearing was taped and open to the public, the set-up similar to an American courtroom. All looked in order. But the road to reform was ugly.

Chihuahua picked the worst possible moment to launch its reform — during the height of a vicious drug war that brought a deluge of violence not seen since the Mexican Revolution. Police were buried under an avalanche of cases from daily murders to kidnappings and extortion. It was impossible to keep up and it showed in court. Suspects were arrested and released due to lack of evidence. People nicknamed the new judicial system “the revolving door.”

Chihuahua has since made important advances with its police, but other states are far behind.

“There's been very little, almost no training and preparation of police," Shirk said. "Police will now be called as witnesses in court ... they're going to have to be ready to answer for how they handled a particular crime scene or suspect and they're just not ready for that.”

The U.S. has spent millions in federal tax dollars via the Merida Initiative helping Mexico implement judicial reform. Most of those funds have gone to train Mexican judges, attorneys and law students. A smaller amount has gone to train police.

But even in its infancy, judicial reform is showing signs of progress.

The old system was ridiculously slow — as in two-to-five years to sentence someone for a burglary. Now there are pretrial alternatives that can lead to a resolution in 30 days. People accused of nonviolent crimes can now wait for a pending trial outside of jail, reducing overcrowding at prisons.

Meanwhile law schools across Mexico are now preparing students to operate under the new system. At a college campus in Mexico City last month, a group of law students mingled after completing a two-week workshop led by legal professionals from the U.S. and Chile. They topped it off with a mock oral trial performed in front of their teachers and peers.

For many of these students, like Brenda Romero, the new justice system is all they know.

"I've always known I wanted to study law," Romero said. "But thanks to these courses, I'm certain I've found my passion."